In what may have been the world’s first protest against a genome edited GMO food product, the GABA tomato, activists from Consumers Union of Japan and the No! GMO Campaign gathered outside Sanatech’s offices in central Tokyo, Japan on 23 December 2020.

From: Consumers Union of Japan, No! GMO Campaign

We are a consumer organization that is working for food safety.

It has been reported that your company is distributing free of charge high GABA tomatoes produced with genome editing technology for home gardening. We believe that genome editing technology, like genetic modification technology, is potentially risky as it can cause unintentional genetic mutations and create unexpected harmful substances in crops. We are concerned that it is a big problem that genetically engineered foods, whose safety has not been fully confirmed, are being used for food.

We have some doubts about the explanatory materials that your company submitted to the Ministry of Health, Labor and Welfare (MHLW) and posted on the MHLW website, and we believe that the act of free distribution for home gardening, as announced by your company on your website, is tantamount to human experimentation.

We would like to ask you a few questions about your explanatory materials and your thinking. We will publish your response on our website.

The biggest concern about GM crops is the production of unexpected harmful substances due to unintentional genetic mutations that occur in the process of genetic engineering. In relation to this, we would like to ask the following questions:

(1) In the explanatory materials, you say that you searched for off-target candidates using two methods and investigated mutations in areas common to both methods.

(2) Instead of narrowing down the off-target candidates, you should check all the genes to see if there are any off-target cases.

(3) In the description of the allergen confirmation, there is a phrase “where mutations were identified in the target sequence and off-targets,” which contradicts the explanation in the previous section that there were no off-targets.

(4) Allergen identification was performed only for the locations where mutations were identified in the target sequences and off-targets.

(5) Tomatin was analyzed and it is stated that “Since tomatin did not increase, it is assumed that the analogues of tomatin and other alkaloids did not increase as well.”

(6) Please disclose which substances were analyzed for changes in composition compared to the pre-genetically engineered crop, and what the results were.

2. We believe that the “substantial equivalence” assessment of genetically modified crops is not a guarantee of safety because it does not confirm the production of the unexpected harmful substances mentioned above. Genome edited crops are not subjected to “substantial equivalence” review, but it is tantamount to human experimentation to use them for food without any confirmation of safety. In relation to this, we would like to ask the following questions:

(1) An antibiotic resistance gene is used as a marker gene, and a cauliflower mosaic virus gene is used as a promoter gene. What kind of research has been conducted on the effects of these genes, which may lead to unexpected genetic mutations?

(2) Do you have any plans to conduct animal experiments to confirm the safety of the product?

(3) In the explanatory materials, it is stated that the recommended intake amount will be indicated when the product is put on the market, but how do you think it will affect pregnant women, people with underlying diseases, and infants with an underdeveloped blood-brain barrier?

(4) Do you think that consumers who apply for the free distribution of genome edited crops for home and garden use will do so after learning about the risks pointed out by consumer groups? Or will they only apply based on your explanation of safety?

(5) How do you plan to understand the health effects of high GABA tomatoes?

This genome edited tomato was developed as a national project. Since the taxpayers’ money has been invested in this project, there should be social responsibility based on this. We would like to ask a few questions regarding this point:

(1) How much funding was provided by the government?

(2) Why are you rushing to market before you have a social consensus?

(3) How much of your budget is used to acquire intellectual property rights?

This is a brief report on the current status of new and emerging GM technologies, including genome editing, in Japan. We also want to highlight the debate and protests that are ongoing regarding such technologies. Consumers Union of Japan has concluded that we do not want to be unknowingly exposed to food artificially created in this way, and that we do not need such genome-edited food.

Click here to down load the report (PDF): 20201202 Report Genome Editing in Japan

Open Letter of Inquiry Regarding the
Handling of Genome-Edited Foods

We are citizens’ groups campaigning against the use of genetically modified technology in food.

In such a situation, a new type of so-called genome edited food has emerged. The Japanese government has decided on a policy of no prior notifications, no safety reviews, and no labeling requirements for genome edited foods, as long as no foreign genes remain in the food. However, it is known that genome-edited foods can also cause off-target and other unexpected genetic changes. Consequently, the explanation that they are the same as mutations in nature is wrong. Genome-edited crops are reportedly already being cultivated and distributed in the United States, and the development of genome-edited animals and plants is underway in Japan and abroad. It is uncertain when they will start to be distributed in Japan as well. If genome-edited food is distributed without labeling, it would not be possible for consumers to purchase food products without concern.

In light of this situation, we have decided to ask food manufacturers in Japan what their current awareness and intentions are. Please respond to the attached questionnaire.

Your answers should be in writing by the end of November 2020. You can send us your answers by mail or by email. In addition, we will publish your answers, including whether or not you answered, so please do not hesitate to contact us.

Question 1: What do you think about foods produced with genome-editing technology?

Please circle one reply and leave any comments in the space provided below.

1) We think we should take a cautious approach in consideration of safety.
2) We will consider the issue in the future.
3) We believe that there are no safety problems since the country has evaluated it.
4) We are not particularly aware of genome-editing.
5) Other

Question 2: Do you plan to handle foods produced with genome-editing technology?

Question 3: Have you had any problems with genome-edited foods?

CUJ and the No! GMO Campaign have published a new booklet about the dangerous herbicide glyphosate, the active ingredient in Roundup and other brands. Written by Amagasa Keisuke, it outlines the recent events including lawsuits in the US and new data about the toxic effects. Here in Japan, residue of glyphosate has been found in bread made with imported wheat. 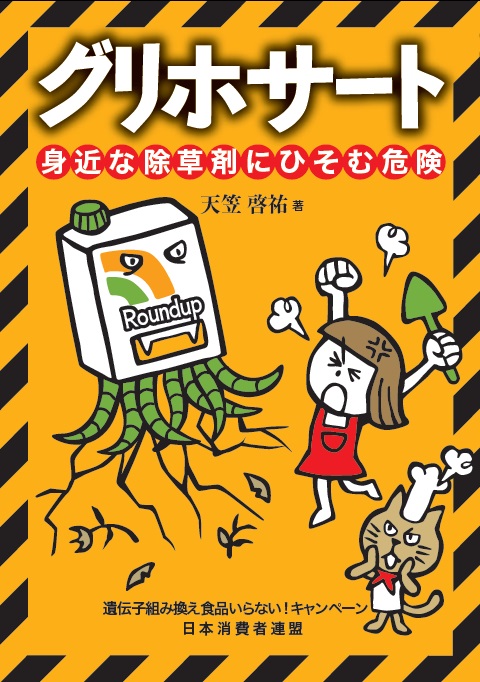 The booklet also exposes how in 2017, the Japanese government increased the legal residue levels in many foods:

In Japan, many soybean farmers are using glyphosate-based herbicides including Roundup as a pre-harvest chemical, in order to dry the crops while they are still maturing. CUJ and the No! GMO Campaign have been successfully campaigning to get soybean farmers in Hokkaido to stop this practice. In other countries, especially in North and South America, farmers are growing crops that are genetically modified to tolerate glyphosate. In Japan, there is no commercial farming of such GM crops, but imported feed and food oils often contain GM ingredients such as GM soy, GM corn or GM canola (rapeseed). Look for the label on products including soy, such as tofu, soy sauce and natto if you want to avoid GM ingredients that can contain glyphosate residue. 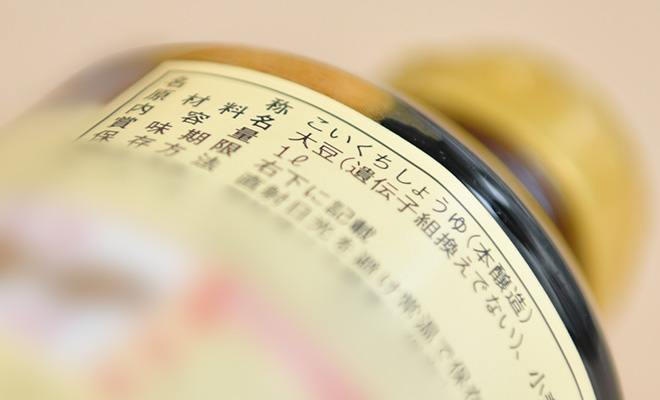 The 64 pages booklet is in Japanese. You can order it here:

Activists have for many years participated in actions around harbours all around Japan. They collect and test wild-growing canola along roads and near food oil factories. The import of Genetically Modified canola, which started in the late 1990s, led to GM plants growing wild, an unintentional effect that poses a risk to the biodiversity of similar plants. Canola is a member of the Brassica genus and many other edible plants are grown in Japan, thus increasing the risk that cross-contamination will occur of related foods like cabbage or broccoli.

In 2006, the government started taking an interest in this issue, after intense lobbying by CUJ and the No! GMO Campaign, who are helping to organise the testing. The Ministry of Agriculture, Food and Fisheries (MAFF) has again this year announced that they have found GM canola growing wild around seven harbours (Tomakomai, Kashima, Chiba, Nagoya, Yokkaichi, Kobe and Hakata). They also found wild-growing GM soy at one harbour (Hakata).

It is believed that the imported seeds easily fall off conveyor belts and lorries as they are transported from the ships that enter the harbours. According to Bio Journal, when 165 individual seeds of Brassica napus were tested, 20 were discovered to have resistance to both glyphosate and glufosinate.