Last year, at the beginning of 2015, I wrote the following: “In order to avoid war and aggression, we should work towards peace and make sure we have a government that keeps peaceful relations with Japan’s neighbours in East Asia, and not engage in exporting weapons. I would like to maintain Japan’s Peace Constitution as a true deterrent, and not rely on military alliances which lead to the endless escalation of armament in our region of the world.” Unfortunately, during the past year we have seen the government move in exactly the opposite direction. In particular, on October 1, 2015 the Acquisition, Technology & Logistics Agency (ATLA) under Japan’s Department of Defense was established. Using tax payers’ money, armaments are being imported from other countries, while Japan prepares to start exporting domestically produced weapons and weapons systems. In my opinion, engaging in trade with weapons that kill indiscriminately is a shameful act. Aiming to make profits in such a way, the Abe administration made this a national policy. Instead, it is my sincere wish that during this new year, we should work towards demilitarization and finding peaceful solutions for the conflicts that are causing so much suffering. I strongly believe that most people agree that this is a better way forward towards world peace.

(Koa Tasaka is co-chair of CUJ)

Protest Action against Japan’s new Acquisition, Technology & Logistics Agency (ATLA) under the Department of Defense on October 1, 2015
Prime Minister Shinzo Abe and his administration has done everything in his power to change Japan’s peace constitution, defying the peaceful wishes of a majority of the people. His government abolished the nation’s Three Principles banning exports of weapons in April, 2014. The plan is to make Japan a major weapons producer and arms exporter. Abe has even gone so far as to order the purchase of 17 Ospreys from Bell Helicopter in the United States for $3 billion, wasting an extravagant amount of tax revenue.
“Making a profit selling weapons is a most contemptible act, but the Abe government is now attempting to engage in this vile behavior as a state enterprise,” comments Koa Tasaka, co-chairman of Consumers Union of Japan. It is estimated that a third of Japan’s entire defense budget is being allocated for the new agency to handle the sales and purchases of weapons under the Department of Defense.
It rained on October 1, 2015, the day the new Acquisition, Technology & Logistics Agency (ATLA) under Japan’s Department of Defense was established in central Tokyo. A protest demonstration was held by peace organizations and NGOs outside the gates. Koa Tasaka further notes: ”I would like to step up the activities to bring down Prime Minister Shinzo Abe’s administration in the next election as he is persevering in his immoral support for the weapons industry.”
Koa Tasaka explains: “Production and exports of arms should be stopped. Exporting weapons and weapon systems evokes war and prolongs suffering. More and more people have become aware of the importance of peace, especially considering the horrible impact war has on children around the world. In spite of this, Shinzo Abe’s government and Japan’s Federation of Economic Organizations (Keidanren) are behind the immoral promotion of this, giving priority to money over the lives of human beings.” 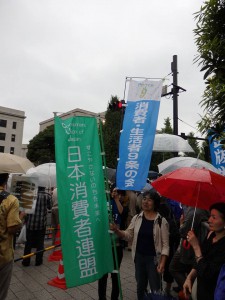 I participated in the large demonstration outside Japan’s parliament on August 30, 2015, against the proposed war bills, demanding that the Abe government withdraw the bills. Our goal was that over 100,000 people would participate, but the organizers estimated that over 120,000 people showed up. It was the first time we brought the blue flag of our new group, Consumers and Citizens for Article 9. Together with Consumers Union of Japan’s green flag, we shouted our slogan, “We oppose the war bills!”

“It’s my first time to participate in a demonstration,” said a friend as we walked together in the light drizzle.

The demonstration in central Tokyo was one of more than 300 all over the country during the weekend protesting Abe’s move to loosen the post-war, pacifist constitution’s constraints on the military.

We oppose the legislation that would allow Japan’s military to fight overseas, and want to save Article 9 of the Constitution, the important peace clause that renounces war.

NHK’s main news broadcast that evening at 19:00 didn’t have our demonstration as the top news, but put it at third place. Anyway, my heart was beating hard as I watched the TV coverage of that important day’s event. During the demonstration I was also able to hand out information about our meeting on September 14 with guest speaker Ms. Uehara Hiroko, former mayor of Kunitachi City, a long-time peace activist from the consumer movement.

Name: “Thinking about the War Bills from the Viewpoint of Our Livelihood”