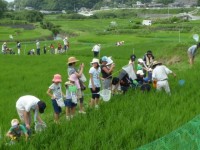 Food and agriculture that protect biological diversity: Aiming for a world without GMO (Image from Kagoshima prefecture

Consumers Union of Japan and other groups that we usually work with, including the No! GMO Campaign, has focus on the MOP5 negotiations to be held in Nagoya in October 2010 about biological diversity. Our network is called Japan Citizens’ Network for Planet Diversity, with a website: http://mop5.jp (in Japanese). You can also follow CUJ’s English website for updates at http://www.nishoren.org/en/

During 2010 we have held a number of events and conferences, as well as local study group meetings. We are very concerned about how genetically modified organisms can be a threat to biodiversity. Since 2004, groups of volunteers have participated in activities to investigate wild-growing GM canola near roads and harbours in many locations around Japan. Of course there are many other examples of how genetic engineering and monoculture farming of GM crops will contaminate conventional and organic food production.

We hope to raise awareness about the problems by organizing a side event on October 12, 2010 in the building where the UN negotiations will take place. We are also organizing several events to discuss the on-going negotiations with guests and experts from Japan and other countries.

For our foreign friends and supporters, the pre-event in the park on Sunday on October 10 and the Forum on October 11 (Monday) will perhaps be the most interesting. Among the speakers on October 11 will be Canadian farmer Percy Schmeiser, Australian anti-GMO activist Julie Newman, Norwegian expert on Mexican maize David Quist, and special guests from South Korea and The Philippines, who will talk about GMO-free zones and the Asian campaign against GM rice. Speakers from Japan include Amagasa Keisuke from the No! GMO Campaign and Kawata Masaharu, who has led the efforts to expose GM canola contamination around Japan.

We hope Nagoya will give real results both inside the negotiation hall and outside among citizens, who want to help protect our food and our farming by thinking locally and globally about genetic resources. The theme for our actions is “Food and agriculture that protect biological diversity: Aiming for a world without GMO.” Hope to see you in Nagoya!