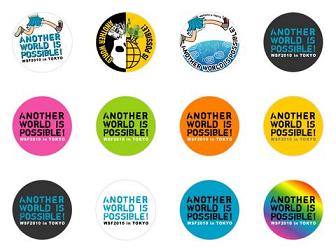 On Sunday, January 24, 2009, the forum meets in Tokyo under the theme of Another World is Possible. Yasuaki Yamaura from Consumers Union of Japan will participate as facilitator. Update: Read Yamaura-san’s report!

300 people participated in the World Social Forum in Tokyo, Japan on January 24, 2010. The event was held as prominent figures in politics and business met for the World Economic Forum in Davos. Similar protest events were held around the world. In Tokyo, we held 12 subcommittee meetings, and a photography exhibition with World Social Forum around the world as a theme. There was also a music performance by Amami folk singers from Kagoshima Prefecture, called Maburi Spirit.

This year marked the tenth anniversary of World Social Forum, which held its first meeting in 2001. Kenji Agou from Seinan Gakuin University traced the development of the WSF from the protests against capitalism in the 1970s to the crisis of consumption and investment, with “neo-liberalism” emerging as a tool for deregulation and globalization in the 1990s. He pointed out that this has directly caused poverty and increased the income gap between the rich and poor on a global scale. The collapse of the neo-liberal world order came around 2007 with the subprime loan crisis in the United States. We are now seeing a rise in the position of developing countries and more power to the G20 members, as no single country can claim to be world leader.

There are no simple solutions for the current global crisis, but the new social movement such as WSF can at least be a way to confront neo-liberalism and provide alternatives to the crisis of the economic and financial world.

In Tokyo, the subcommittee meetings held discussions about a range of topics including labour issues, poverty reduction, gender inequality, climate change, finance, military affairs, and media. Here, let me focus on the keynote speech by Keisuke Amagasa of the Citizens Biotechnology Information Center, who led the subcommittee on biological diversity and its importance for food safety. He noted that a few large biotech companies such as Monsanto Co. are trying to take control over the world’s agricultural seeds. This has led to pollution and contamination problems wherever genetically modified foods have been introduced. He warned that when independent testing of GM crops has been done, safety issues have emerged. There are also serious concerns about the effect on biodiversity if GM crops are introduced. In reaction to this, farmers and citizens have joined forces in a strong call to the negotiators who will meet in Nagoya in October 2010 to act positively on the global agreement to protect biological diversity and carefully study rice paddy diversity and the abundance of living organisms that are coexisting with rice farms.

In the subcommittee meeting called “Searching for another way – food and agriculture” Tousaburou Sato discussed the problem of poverty in farm villages in rural Japan. The 74-year old farmer and writer talked about his childhood memories, when he was a young student at a local “Yamabiko School.” While there was not enough rice to eat, everyone supported each other in the regional society. These days, people take food for granted, but conditions for those who are making a living in the rural areas have not improved. Last year, SDP promised new reforms for farmers as it is almost impossible to survive unless one also does other jobs, and the average age of Japan’s farmers is very high.

Other speakers pointed out that the solitude and loneliness of senior citizens in rural Japan should not be forgotten. They hope that people living in farm villages and cities will join forces to tackle the problems.

It became clear during this event that the World Social Forum movement must deal with the entire set of problems caused by neo-liberalism and globalization, including poverty, income gaps, and peace/military issues. It is my hope that we will see more WSF events in many locations around the world in the future.

Article first published in Consumers Report No 1456 (in Japanese)