Noguchi Isao was born in the seed shop that his grandfather started. In this special 2-part interview Consumers Union of Japan highlights his efforts to share his wealth of knowledge about seed and farming. Noguchi explains his fascination with “old” style vegetables and the huge difference in taste compared to F1 (hybrid) varieties and why he is against GMOs. We get a glimpse of his deep respect for the biological diversity and genetic heritage that are the basis for the seeds he helps develop and sell to farmers, giving consumers a taste of real food.

Noguchi moved to Tokyo and dropped out of college when he was hired by the famous animation company run by Tezuka Osamu. Noguchi, who is 65 years old, has been fascinated by the world of manga and animation since elementary school, but when he turned 30, he quit Mushi Production Co. to enter his family’s seed business in Hanno, a city in rural Saitama prefecture, northwest of Tokyo.

Noguchi remembers a discussion he overheard during a dinner with the three great Science Fiction writers Tezuka Osamu, Sakyo Komatsu and Hoshi Shinichi talking about cod roe. Hoshi Shinichi asked: “If you collect the ova from Yoshinaga Sayuri, how many years would you have to carry on until you had as many eggs as in one cod roe?” Yoshinaga Sayuri was a popular actress around that time, and Noguchi was very surprised by the mind-boggling question.

It turns out that a female cod carries as many as 300,000 eggs in one single bag of roe. On the other hand, the number that a human female can produce in her life is only about 400. Also, the cod can make 750 generations in the same time as humans make only one. Thinking about it that way, the SF writers calculated that 750 generations before Yoshinaga Sayuri appeared on the scene, there wasn’t really a country called Japan as we would be back about 18,000 years ago. Noguchi remembers how Sakyo Komatsu pondered this information saying: “That is just outer space, contained in a single cod roe egg.” Noguchi is still impressed by the SF writers he met in his youth and their brilliant minds.

After 35 years in the vegetable seed business, Noguchi maintains a great interest in the science of DNA and respect for its mysteries. In his books and lectures, he likes to remind people of the role of the mitochondria in living organisms. It is the tiny organelle that provides energy inside cells. Noguchi is fascinated by the fact that the mitochondria have their own genome, irregardless of whether they are inside a human cell or a plant cell. Also, because mitochondria are transmitted only from the ovum, they allow us to trace the mother’s genetic lineage.

Noguchi enjoys talking about the ancient history of mitochondria as a way to explain how we humans became different from plants through evolution. After the birth of the first living organism some 3.5 billion years ago, we have anaerobic bacteria to thank for surviving on planet Earth.

But when the genome or a gene is damaged by aging or stress, the mitochondria also have the role of attacking the cell. This can cause cancer or other disease. Noguchi points out that we need to understand this mechanism to also grasp the importance of staying healthy – and he makes the connection to conserving and preserving healthy seed.

In 2004, Noguchi’s seed shop got an unusual request from a TV program. The reporter and actor Fumio Watanabe contacted the shop, saying he wanted to eat “old” style vegetables. The staff of the program initially visited the shop in Hanno city, and they talked at length with Noguchi about heirloom varieties and veggies with names like Hanshiro kyuri (half white cucumber that was popular in Tokyo in the Meiji era) and Izumi mizunasu (water eggplant from the Izumi area of Osaka which is particularly suitable for pickling).

A photograph of the famous actor together with Noguchi was displayed in the shop window. This prompted a customer from a local newspaper to ask if Noguchi was always enjoying such delicious heirloom vegetables.

Of course, as the old saying goes, “seeing is believing,” or “a picture is worth a thousand words.” In Japan, Noguchi explains, the saying is “hyakku bun ha hitokuchi ni shikazu” or, loosely translated: “One bite is worth a hundred words.” He sees it as his mission to educate people about the great taste of “old” varieties of vegetables, and the importance of using heirloom seed for local varieties that are well suited to the climate, the geological features, and the soil.

Since ancient times, farmers would carefully select seed from vegetables that grew well and tasted wonderful, in addition to other characteristics including shape and color. By continuously saving such seed, season after season, the regular native seed (sometimes called heirloom varieties to emphasize that they are regarded as an important cultural heritage) that became trusted as stable varieties over long time periods.

This is in stark contrast to the F1 seed used for most vegetable farming since the 1960s, when they replaced the regular native varieties. F1 are hybrid seeds that are developed in an artificial way so that the plants will be growing fast in a uniform way. The shape and size of the vegetables are also more similar, and they can be treated in an industrial way. The aim is to develop products that are as identical as possible, for easy processing in the food industry and supermarkets.

On the other hand, heirloom seed are often having uneven shapes and come in all sizes. Some may also start growing earlier than others, and a few may even adapt to changes in the climate or the growing conditions. The vegetables from such regular seed went out of fashion, as people complained about the difficulties of shipping and storage. Noguchi chuckles as he remembers a story about a customer of an organic food delivery company who refused to accept a box of Miura daikon grown locally in the Miura region of Kanagawa prefecture, because none of the radishes in the box were the same size.

It is thought that there were as many as 200 different kinds of daikon in Japan during the Edo era (1603-1868). Today, most people think of daikon as a white, long root vegetable, but there were many varieties with shades of purple or other colours and shapes. The Miura daikon, for example, is a descendant of the Nerima daikon, as farmers found a variety that could be grown further south in the warmer climate in the Miura region.

Noguchi emphasizes that the taste is so very different if we compare such heirloom varieties to the ones produced from F1 seed: “The F1 daikon is dull, there is no sweetness, while the heirloom daikon really tastes like daikon!” Also, the heirloom seed can take up to 4 months to grow, while the F1 seed will be ready in just 2 months. This also means that the heirloom daikon stays moist and tastes fresh longer, as each cell has developed a little more slowly and properly.

Noguchi’s grandfather won awards for his vegetables, including a Miyama turnip that was praised by experts almost 80 years ago. It is still on sale today, as a heirloom seed.

Recently, as people tasted this Miyama turnip, they were surprised and told Noguchi that they hadn’t been bothered to try eating turnips for a long time. They all agreed that this is because the F1 variety turnips on the market today simply don’t taste very good. Today’s turnips have been “improved” by modern seed companies to the point where they have become unpalatable.

Noguchi thinks this is because the native Japanese heirloom turnips were bred with the type of turnips used in Europe as animal feed. F1 turnips are more firm and easy to pack and ship without any cracking, and there has been little or no consideration for the taste. Noguchi laments this state of affairs.

Trying to explain why farming has changed so much, Noguchi mentions how nitrogen became available after WW2. This was the main raw material for bombs, and many factories had been built to produce as much nitrogen as possible. Using nitrogen as fertilizer on farms was also a way to quickly produce more food, as countries like Japan and South Asia and China faced food shortages.

However, in the case of rice, if too much chemical fertilizer is applied, including nitrogen, the stalks just grow too long and the rice plants bend down instead of producing more rice. The solution for this was the “improved” strains or rice that could handle the chemical fertilizers. (Sometimes these hybrids are called “high-yield” varieties in English, although critics note that they are actually “high-response” varieties that respond to the artificial growing conditions with chemicals and other added tools to increase the yield.) 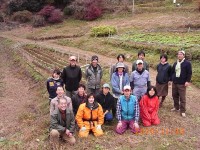 Around the same time, the petrochemical industry developed and promoted more types of chemical fertilizers, pesticides, vinyl houses and other modern tools for the farmers. Noguchi sees the irony in that the poison gas factories of war could so easily be made to produce agrochemicals instead.

By 1964, the year of the Tokyo Olympics, Japan had basically completed the shift towards such “modern” agriculture. Around that time, it was getting more common to send a second and a third son away to work in factories, and they were called “golden eggs” as they could earn a living. Farm rules also changed to help elderly farmers survive with only the help of one son, through different reforms. One such new system designated different regions to be integrated and selected for specific vegetables or farm products. This made farming more efficient as new machines could be introduced to save labour.

This reform of designated vegetable production meant that a region like Kochi focused on red peppers, Gunma on cabbage, Kumamoto on tomatoes, and so on. But after a few years of this kind of continuous monoculture cropping, the soil suffered and insects became an increasingly serious problem. The answer to this was more research and development into F1 varieties to deal with the different issues.

This is how F1 vegetables became so common in Japan. Noguchi likes to compare to France, where some 70-80% of the vegetables come from heirloom seed, and even supermarkets mostly sell “old” style varieties.

(Please click here to read Part 2 of this interview)