A quantitative analysis based on the Food Demand-Supply Table, the Guideline of Nutritional Requirement for the Japanese people, and the Local Production-Local Consumption principle

Paper presented at the World Foodless Day in Tokyo, October 16, 2008

The current world-wide food crisis has made it clear that the low Japanese food self-sufficiency ratio is the underlying cause of various food-related problems. As one of the fundamentals for our survival, food is more and more dependent on foreign political and commercial trends that are beyond our control. Also Japan hunting for food in other countries contributes to the tension on world food trade markets and tends to raise international food prices. Japan’s food mileage, the world’s highest, reaching 910 billion ton-km in total, and 7,110 ton-km/capita annually [1], is adding a large amount of CO2 into the global atmosphere. This paper looks at ways to improve Japan’s food self-sufficiency from the consumer perspective.

Motivated by a number of concerns, we attempted a quantitative analysis on to what level Japan’s food self-sufficiency could recover. For this purpose, we used a static model based on the Food Demand-Supply Table (a statistic published by the Ministry of Agriculture, Forestry and Fishery), the Guideline of Nutritional Requirement for the Japanese (published by the Ministry of Health, Welfare and Labour), and the Local Production-Local Consumption principle.

Japan’s food self-sufficiency ratio is estimated to be around 40% in 2007. Several estimates of Japan’s potential food self-sufficiency have already been made, but in general, they have focused mainly on the supply-side, assuming selectively that the demand-side of food remains out of the policy scope. However, one of the main factors causing our low food self-sufficiency can be attributed to the over-consumption of meat and fat, items that are unsuitable for the Japanese farming conditions [2].

That is why we asked, “What if the Japanese dietary habit changed to one more healthy and more suitable for domestic production?” To do this, we decided to create a model on the basis of the demand-side approach, starting with our food consumption patterns, followed by the domestic food production efforts adapted to these patterns.

The first food consumption pattern we took as a model is a set of food intake and nutritional data recommended by the Ministry of Health, Welfare and Labour. This pattern has been created as the ideal for Japanese people to maintain their health, avoiding lifestyle-related sickness (MHWL pattern). The second pattern is a set of food requirements based on the daily meal menus organised specifically for our model by Setsuko Shirone, an expert of sustainable food consumption and organic agriculture. Let us call this Chisan-chisho pattern (LP-LC pattern), after a popular movement that encourages local production and local consumption in Japan.

Figure-1 shows the differences of the consumption of each food-group or item per day per person compared with the status quo (as of 2005). According to the MHWL pattern, the ingestion of grains, potatoes and vegetables would increase, while consumption of meat, milk products, sugar and fat would drastically decrease. Turning our attention to the LP-LC pattern, we note that this tendency is even more radical. The exception is the high amount of marine products intake that is still considered to be possible; all of this, however, consists of small fish and coastal fish, as well as continued consumption of other domestically available marine species. 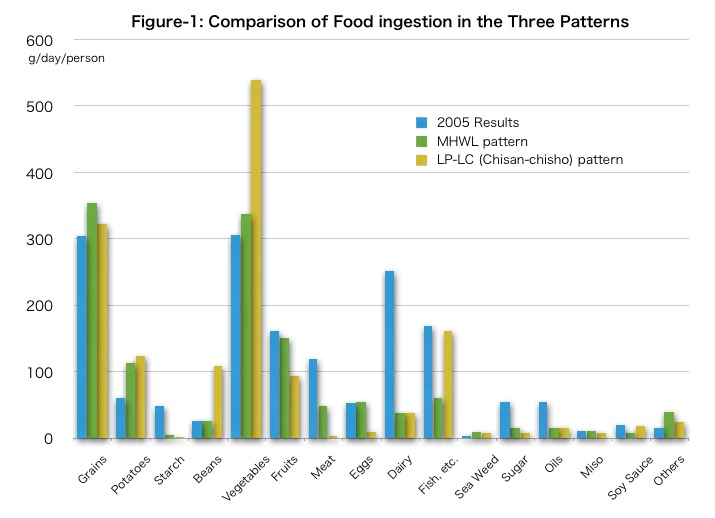 The main nutritional values of the three different patterns are shown in Table-1, together with the recommended values. In the 2005 results, energy, calcium and iron are lower than recommended, while the fat energy ratio is excessive. In the MHWL pattern, improvements are observed for many items, but the fat energy ratio is even worse than for the 2005 results. In the LP-LC pattern, all the values are satisfactory and better balanced.

The import of feed grains for animal food production and oil seeds are the main factors pulling Japan’s food independence down. In our model, with a view to reducing import of these crops, all the changes in meat and fat consumption are reflected on the decreased levels of imported feed grains and soybeans, respectively.

Next, we assumed the possible and realistic domestic production levels of each food-group. The production is determined by two factors: production per unit area (yield) and planting area.

We also estimated the self-sufficiency rate in the case where the production of all the crops would be supplied by organic agriculture. To do this, we relied on the results of a study by MAFF [3] that the yields from organic agriculture is 14% lower for grains compared to conventional agriculture, and 10% lower for other crops.

Example of the Estimation of Domestic Rice Production Potential

Let us take the example of rice. The rice planting area peaked at 3.31 million hectares (ha) in 1960. But since then, and especially after the introduction of the policy of reducing rice production in 1970 due to excessive rice stock, the area has continued to drop to reach 1.71 million ha in 2005, about half of the peak area. During the period, some 0.84 million ha of rice paddy was irreversibly transformed into other usages like housing and industrial land. So, the potential area for rice is reduced to approximately 0.76 million ha. In our analysis, we assumed a conservative figure of 0.6 million ha as the additional rice planting area.

As for the rice yield per unit area, it has continued to increase since 1960, although the growth rate has slowed down since 1970, due mainly to the discontinued effort for more rice yield after the introduction of the policy to reduce rice production (see Figure-2). Japanese agronomists estimated in 1976 the maximum rice yield possible in Japan should be around 7.5 tons/ha, and forecast the yield improvement of 22% in ten years (from 4.5 t/ha to 5.5 t/ha), or 2.0% increase per year. Based on this forecast, we assumed a rice yield of 6.0 t/ha, 0.73 t/ha increase from the 2005 result, which should be attainable in 16 years at the yield increase rate since 1970, or in 7 years at the yield increase rate until 1970. 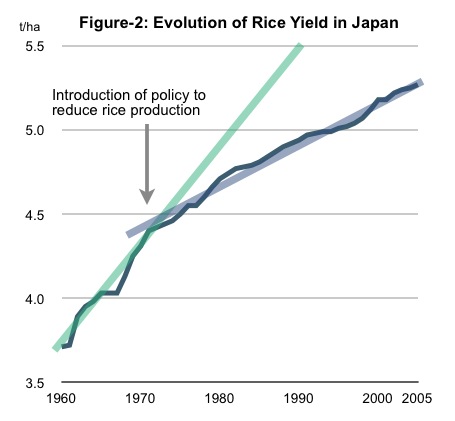 The assumptions we made for all crops are shown in Table-2. The total planting area would be 6.52 million ha, or 2.13 million ha more than the 2005 result. This figure is 1.75 million ha lower than the official figure of Japan’s post-war peak of 8.27 million ha recorded in 1956. 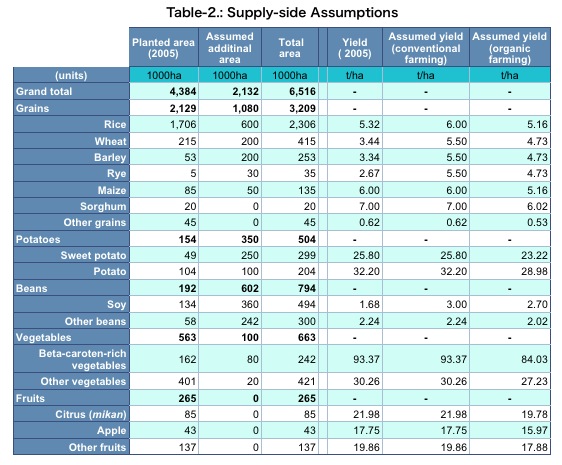 With these assumption put into our model, we obtained the results shown in Table-3 and Figure-3[4]. 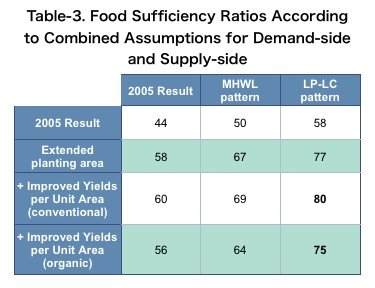 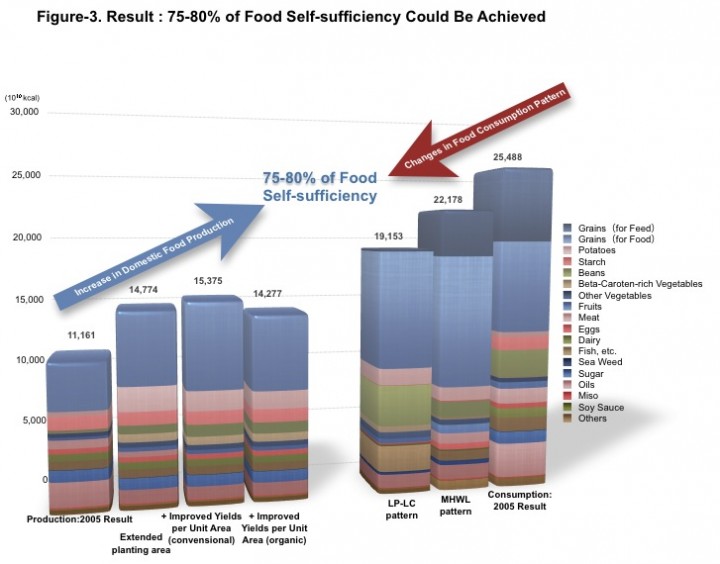 From these results, we could draw the following conclusions:

Our analysis showed that Japan has a potential to achieve a very encouraging food self-sufficiency ratio of 75-80%. This leads to the next question, which was put out of the scope of our analysis: how can Japan fulfill this potential?

[2] The “westernization” of the Japanese dietary habit was not brought about naturally, but by the US post-war world food strategy. Suffering from excessive domestic production due to rapid mechanization and low prices of grains, the US embarked on a strategy to export huge amounts of grains, mainly to Europe and Asia. In Japan, the campaign by the US government to induce the Japanese population to eat more non-rice grains consisted of the introduction of wheat-based foods as well as of livestock fed with imported grains with a view to “improving the nutritional conditions” of post-war Japan. For example, the so-called “Nutrition Education Buses” or “Kitchen Demonstration Buses” (“Kitchen Car” in Japanese) visited every corner of Japan, driving from town to town, teaching the need to improve nutritional conditions. Staff showed how to cook wheat foods and soybean foods that people were taught to be “vehicles that convey nutrition” (and at the same time explaining how rice was “a vehicle that conveys death”). There was also the mobilization of Japanese nutritional experts to tell people that “a diet dominated by rice can lead to dysfunction of the brain, and ultimately to a premature death”. The introduction of bread- and milk-based school lunches in Japanese primary schools during the 1960s was also a part of this strategy. The US strategy was readily accepted by the Japanese government in exchange for export of Japanese industrial products to the US. The Japanese population consistently supported this policy and tended to prefer western-style foods throughout the high growth period. The “Japan model” was so successful that the US expanded it to other Asian countries, and even to African countries.

[4] We have to note that the food self-sufficiency ratio output from our model is about 3% higher than the official figure based on the ratio of domestic production in each food item supplied to an individual. This is due to the fact that the Food Demand-Supply Table that constitute the framework of our model is not a “balance-sheet,” but an “open-ended matrix.” More precisely, domestically produced canola oil figures in the Table, representing 3.3% of the total calorie-base food supply, but it is not the case with canola grain, from which the oil is made and which is almost totally imported, by reason that the grain itself is never directly eaten, but that it is used exclusively as “industrial material.” The same can be said for other items like cottonseed oil.