Here is the presentation made by Yasuaki YAMAURA, Secretary General of Consumers Union of Japan (CUJ), as one of the programs at the World Foodless Day in Tokyo on October 16, 2008.

The Present Situation of the Food Crisis 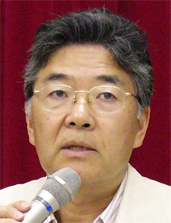 In April 2008, rice prices started to increase rapidly in the Philippines and several parts of Asia. This induced hoarding and export restrictions of grains, which in turn led to even higher grain prices around the world. There were food riots happening in a number of countries.

This also affected Japan, as increasing general food prices hit Japanese consumers hard. In addition, we experienced the problem of frozen gyoza made in China, contaminated by a very toxic insecticide. On top of that, there was a scandal of wrongfully distributed pesticide-tainted or moldy rice for human consumption, and melamine-contaminated milk products produced from imported milk. Such events caused deep anxiety among many consumers.

During 2008, fluctuating crude oil prices directly hit all the primary industries related to agriculture, forestry and fisheries. Livestock producers were affected particularly hard due to soaring animal feed costs, but also rice farmers went into the red due to rising farming material costs. Along Japan’s coast, fishermen were so discouraged by the high fuel costs that they were unable to go out to sea.

As we analyze the actual levels of grains produced and consumed, we note that there was not a dramatic discrepancy, although the gap between supply and demand has gradually become narrower. The real reason behind the abnormal price hikes in 2008 was investors’ sudden interest in grain markets and commodities, as a consequence of the collapse of other investment opportunities. This was the real cause that led to food shortages and even malnutrition or starvation in parts of the world.

Who is making a profit from the crisis?

The major agri-food, agri-chemical and biotechnology companies such as Cargill and Monsanto, as well as the large trading houses that control the markets, have made tremendous profits during the crisis. Monsanto Co was forecasting a profit of some USD 2 billion for 2008, twice the previous year. A large part of this profit was achieved by selling herbicide-resistant GM seed and their herbicide Roundup together as one package.

The current food crisis has been triggered by a number of factors, such as speculative money flooding into the grain markets after the sub-prime loan crisis, a decrease in grain production aimed for food caused by biofuels boom among U.S. farmers, followed by exporting countries imposing regulations to limit grain exports, increasing food consumption in China and India, as well as the decrease in grain production in some regions due to climate change.

But international and national administrative organizations are also responsible. WTO and Free Trade Agreements (FTA), and the global trade in food has are all making it more difficult for nations to take effective countermeasures. Here in Japan, the government has imposed a policy to reduce the area for rice cultivation to reduce production. Japan is pushed to purchase so-called Minimum Access rice, making Japan more and more dependent on imported food. Japan’s food self-sufficiency was estimated to be around 40% in 2007, thus heightening world food demand-supply tension.

The failure of the World Food Summit and the G8 Summit

The food crisis was discussed at several international meetings during 2008.

In June, the United Nations held a Food Summit in Rome to cope with the crisis. 188 countries met to discuss emergency short-term measures and long-term solutions for the 850 million people who lack sufficient food. During the G8 Summit at Lake Toya, Hokkaido, support to developing countries was examined. In the final document from the meeting, government leaders agreed on restricting export barriers and to carefully consider biofuels from the point of view of food security. Also, more investments in agricultural technologies were proposed. We are particularly concerned that this means more money for biotechnology.

At the G8 Summit in July 2008, the solution for the food crisis was mainly more investment in development and an emphasis on increased production.

However, we believe that these measures are a futile, headlong rush away from the real problems.

The free trade philosophy that the World Trade Organization inherited from the Uruguay Round has failed. If the Japanese government really believes that agriculture has multifunctional roles and wants to support the “coexistence of various types of agriculture,” then it should emphasize respect for food sovereignty during the agricultural trade negotiations, and criticize negotiations that deal with the lowering of tariffs. We are also concerned about the Free Trade Agreements (Economic Cooperation Agreements) that Japan is negotiating on a country-to-country basis, with insufficient debate in the parliament or in media.

We are particularly upset about the problems caused during 2008 by the so-called Minimum Access rice policy. Rice of imported MA origin was distributed in Japan after having been stored for several years. Even though it had become moldy and contaminated, it was illegally sold to food manufacturers. The MA rice policy continues to force Japan to import rice at a moment when there are an increasing number of people in other regions without enough to eat. Japan is 100% capable of producing enough rice and should not be forced to import rice. The opaque domestic distribution channels made the problem worse.

First of all, it is necessary to change the global trading system for agricultural products and food. The WTO negotiations should be discontinued and Japan should not go ahead with FTA negotiations with Australia.

Second, it is necessary to change the trading structure where a few countries have a global export strategy with multinational grain and seed companies. In addition, the profiteering and short-sighted investments in commodities have led to increased confusion on the markets. This must end.

To conclude, it is of utmost importance to aim for food self-sufficiency and food independence. For this, we must promote organic agriculture which takes the rural environment into consideration, and promote “local production for local consumption” and protect family farming. We will need to make every effort to create networks of people on the local level to be able to deal with the many contradictions and problems caused by the globalization of the world’s economy.