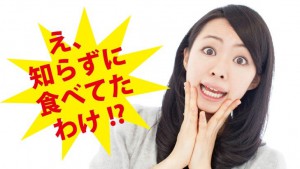 Food labelling in Japan is handled by the Consumer Affairs Agency, but since the enforcement of the Food Labeling Act in April 2015, the agency has been busy with the functional foods labelling issue while the revision of the food labelling system that is high on the priority list for consumers has not moved forward at all.

In discussions with consumers organizations on August 27, 2015, the secretary general of the Consumer Affairs Agency, Kumiko Bando, stated, “We are scheduled to deliberate on the genetically modified (GM) food labelling issue along with Internet food labelling, processed food ingredient country of origin labelling, and food additive labelling and intend to set up a deliberative body by the end of the year.” But at the same time she also said, “Consumer groups have various views, and while listening to the views of the industry organizations I would like to take all of these views as materials for judging how difficult it will be to realize the views of consumers.”

While the movement demanding labelling in the US is picking up steam and stricter labelling is being mooted in Asia, the vast majority of foods such as edible oils and soy sauce are still exempt from labelling in Japan. Demanding the GM food labelling system revision, which is only moving forward at a snail’s pace, Consumers Union of Japan and the NO! GMO Campaign have jointly initiated the One Million Signature Movement for the Strict Labelling of GM Food.

Keisuke Amagasa, author and chairperson of the No! GMO Campaign since 1996, explains: “Currently, only a few foods must be labelled if they contain genetically modified organisms (GMO). These include tofu, natto and miso, for which the GM food labelling has been mandatory since 2001. However, what consumers in Japan really want is for all foods that contain GMOs to be labelled properly. We are concerned that due to the Trans Pacific Partnership, it will become more difficult to get stricter rules for food labelling, because the new trade pact will make it easier for the US government and transnational corporations to challenge others for imposing what they call trade barriers. We have now initiated a campaign to collect signatures to pressure the Japanese government to improve the GMO labelling law. We think this is the last chance. We really want this campaign to be a success!”