The No! GMO Campaign and Consumers Union of Japan, together with other groups and NGOs, held the 10th GMO Free Zone meeting in Aso, Kumamoto on March 7, 2015. Over 500 consumers, farmers, scientists and others participated in the successful event. We also went to Berlin, Germany for the large European GMO Free Zone conference, with 450 activists from all over the world. 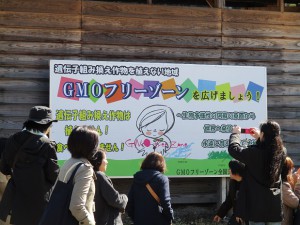 The grass root resistance against genetically modified organisms and GM food is growing even as the largest biotech company, Monsanto, is trying to take over its rival, Syngenta, to create an even stronger hold on GMO seeds and the agrochemicals needed for GMO farming. “Consumers Union of Japan started the No! GMO Campaign in 1996, ” says Koketsu Michiyo, CUJ. “There is no commercial farming of GMOs in Japan, but a lot of soy, corn and canola is being imported. We think the labelling should be better so consumers can avoid GMO food.”