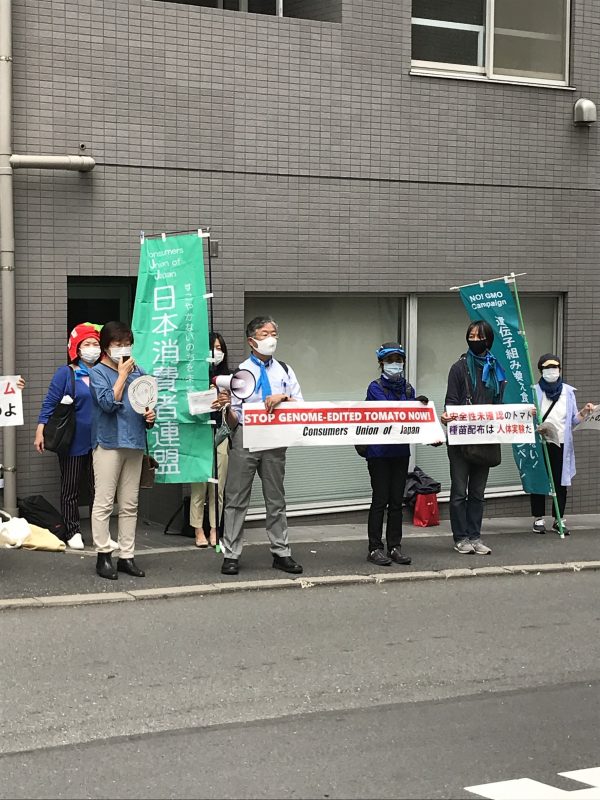 Activists from Japanese consumer organizations and farmers’ groups protested again against the unregulated GABA tomato on Earth Day 22 April 2021. Sanatech Seed is introducing its genome-edited tomato this spring without any safety checks and no mandatory labelling. “It is a genetically modified food and consumers have no idea if it is safe or not, and no way of avoiding it, once it reaches the market,” said one of the speakers at the protest action outside Sanatech’s offices in central Tokyo. This is the second effort to stop the release of the GMO tomato, which is said to be engineered to have “high levels of GABA” without much research to support the claims.

Specifically, the company is giving out genome-edited seedlings for free and claims some 5000 growers are already interested. This could lead to contamination and problems not only for consumers but for nearby farmers and other growers as well. Consumers Union of Japan, the No! GMO Campaign and many other organizations and groups in Japan are urging the company to stop this introduction, and asking how the CBD Cartagena Protocol may apply.

Consumers Union of Japan, the No! GMO Campaign and other groups want to stop the introduction before it is too late.

Activists from Consumers Union of Japan and the No! GMO Campaign and many others will gather outside of Sanatech Inc. on April 22, 2021 in Tokyo to protest against their genome-edited tomato. This action coincides with Earth Day as well as protests in The Philippines against IRRI and GMO rice.