Consumers Union of Japan and the No! GMO Campaign invited Professor Gilles-Eric Séralini to speak about his landmark study that showed how Roundup causes cancer in rats. He warned about genetically modified foods, that are engineered to tolerate Roundup, especially GM soy and GM corn. Séralini is professor of molecular biology at the University of Caen, France, and president of the scientific board of CRIIGEN (Committee of Independent Research and Information on Genetic Engineering). The research conducted by Séralini’s team has serious implications for public health and the environment and should be addressed rationally and on scientific grounds.

Gilles-Eric Séralini has run the research group that has published the most on GMOs and pesticides toxicities in the world. Since he has discovered practices of the big companies to hide this, he was the most cited in the Monsanto Papers and he has won seven court affairs against the biotech lobbies. With his co-author of three recent books, the organic French Chef Jérôme Douzelet, he worked on how to recognize the taste of these pollutants, especially in wines, and methods of detoxication for everybody. The news and views on these topics will be detailed for the general public in a very original manner.

Everyone is welcome to learn more about the risks associated with genetically modified food. 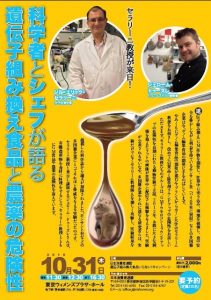