We held a protest action outside the Ministry of Health in Tokyo today on Wednesday, 25 September to protest against the lack of rules to deal with gene edited foods. Gene editing or genome editing may soon appear in food stores as the novel technology appears to gain ground among crops abroad. The lack of labelling in Japan is a serious problem.

Some 43% of respondents to a University of Tokyo internet survey said they would not want to eat agricultural products developed with genome editing technology, according the The Mainichi Newspaper and the figure topped 53% when people were asked about whether they would eat genome-edited animal products. The poll results were unveiled at a June 5 meeting of the Japanese Society for Genome Editing in Tokyo. The survey team led by Masato Uchiyama, a guest researcher at the University of Tokyo’s Institute of Medical Science, queried some 38,000 men and women aged 20-69 in May and June last year, receiving around 10,700 valid responses. 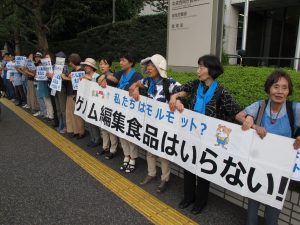 Meanwhile, Consumers Union of Japan was invited to share our views at the NHK TV program Closeup Gendai on 24 September about the lack of regulations.

The debate is certainly heating up in Japan, with this recent Mainichi editorial a good example of the many doubts people harbour:

Editorial: Gov’t should give consumers choice on genome-edited foods

For such a system to work, it is necessary to mandate producers to report genome-edited products and distributors to label them as such. The scheme would also be of help to swiftly respond to unexpected risks.

Up until now, genetically engineered crops have mostly been developed by adding outside genes. Such products are required to undergo safety screenings and be labeled as genetically modified foods.

In genome-editing, meanwhile, specific genes in an existing DNA strand can be clipped out to stem their functions. It is also possible to open a space on a DNA strand to insert an outside gene.

Genome-edited food products mainly employ the former method, as seen in the development of tomatoes laden with substances that reduce blood pressure, red sea bream with increased muscle mass, and high-yield rice — all for research purposes.

The government has made the labeling of genome-edited foodstuffs voluntary as gene disruptions giving rise to new breeds take place even in nature, and because it is impossible to verify the difference between edited and non-edited foodstuffs by analyzing their genomes. Therefore, producers will be encouraged but not required to report information on such edits.

However, Japan’s policy is not entirely in step with the rest of the world. While the United States has similar rules, the European Court of Justice ruled that genome-edited foods — even those without any inserted foreign genes — are subject to the same regulations as genetically modified products.

Some experts in Japan also advocate making reporting on genome-edited items mandatory in order to clarify liability, as such products are “designed” according to makers’ own aims.

Reporting of genome-edited foods will start in Japan next month. While observing how the filing of reports and the labeling of the products go, it is essential to keep considering rules that can best respect the consumers’ right to make their own choices about eating edited foodstuffs.

The Prefectural Nagoya Airport is located in a congested housing district in Komaki City. I can reach it from my home in Iwakura City in 20 minutes by car. It is next to the Komaki Base of the Japan Self-Defense Forces, and nearby the Mitsubishi Heavy Industries Komaki South Factory is busy constructing F35A fighter planes. They seem to have expanded the factory site recently.

When talking about the F35A fighter, it is the same type of airplane which took off from Aomori Prefecture Misawa Base and crashed into the Pacific Ocean in April 2019. The cause has not yet been ascertained. We found out that the fighter plane which crashed was constructed here at the Mitsubishi Heavy Industries Komaki South Factory, thus evoking the interest of the residents in Iwakura City as well as Komaki city. There have also been troubles during test flights and an urgent landing at the Prefectural Nagoya Airport.

Compare that to the entire general annual budget for 2019 of Iwakura City which is 15,700,000,000 yen. That is just a little more than the cost of a single F35 fighter plane. This August, I found it interesting to note that citizens are becoming aware that 11,600,000,000 for just one airplane is such a waste. Also, more people are becoming opposed to using our local airport as an emergency landing strip for Japan’s new fighter jet.