A world-wide debate about the dangers of plastic pollution has led to the introduction of stricter laws in many countries. Japan seems to lag behind so far, but consumers can start reducing the use of plastics in many ways. Many people already bring their cloth bags to the supermarket when you go shopping. In some shops, you get a 2 Yen reduction on the price, but if everyone was serious about it, and the amount raised to 10 Yen or even more, the effect would be immediate.

In the Sugiura household, we tried to reduce the amount of plastic wrapping for food. It wasn’t an immediate success as not everyone went along with the plan. However, little steps can have remarkable consequences. Consumers Union of Japan is asking readers and members to contribute with their own creative proposals. 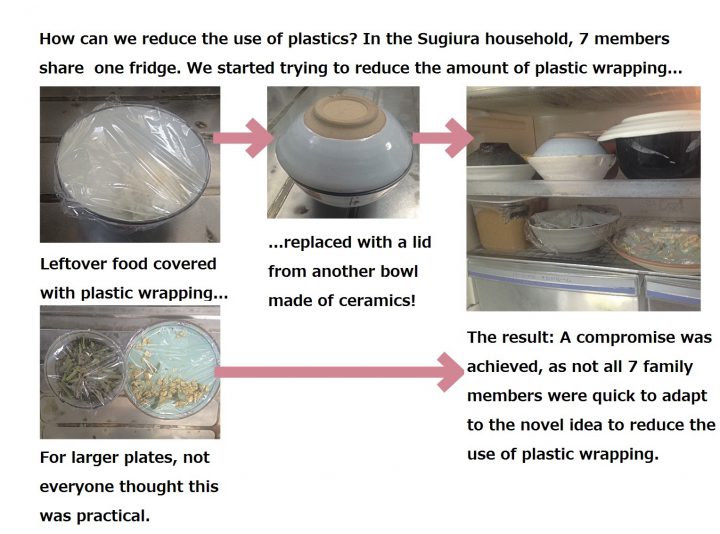 Essay: The Bizarre World of Plastics

When plastic materials were first discovered, they were brittle and fragile. Thus, a number of additives and “plasticizers” were introduced to counter the effects of ultraviolet light and make the materials more flexible and useful. Flame retardants were introduced as well. By the 1960s and the beginning of the 1970s, plastic pollution intensified. Plastic materials must be disposed of, making the garbage problem severe. In Tokyo, the toxic air pollution from the Yume-no-shima incinerators created health problems as increasing amounts of trash were thrown away by consumers.

No thought went into what would happen to plastic materials that were left in the environment. The degradation takes time. Plastic materials basically just turn into smaller plastic fragments. It becomes an invisible danger as animals ingest the fragments, even entering the human food chain. In spite of this, the makers of plastic materials, including Showa Denko, Mitsubishi Chemical, BASF and Du Pont, claim that their novel products are bio-degradable. This has led to the rather bizarre state of the world we are now facing, where the idea that plastics can simply be thrown away has been increasingly promoted.

Consumers Union of Japan has been active in the debate about regulation of GMOs since the mid 1990 and firmly believe the new technologies, such as gene editing, must be strictly regulated. CUJ’s stance is that any such experiments should be stopped to avoid serious adverse effects on human health and the environment.

TOKYO — Consumer groups are taking aim at Aug. 20 recommendations by an Environment Ministry expert committee that some genetically modified organisms (GMO) be deregulated.

The expert committee proposed deregulation of organisms edited to remove or deactivate certain genes as opposed to adding new code, but critics are claiming this is “the same as genetic manipulation,” and that it is “strange” to exempt it from government restrictions.

“They (the committee) came to this conclusion after just two meetings. How can they say it’s safe?” said Consumers Union of Japan secretariat chief Michiyo Koketsu. “We need a debate that includes a wide range of experts, not just a small section of the research community.”

Research is already well underway in Japan on creating meatier red sea bream by disabling a gene that suppresses muscle growth. In cases like these — of disabling genes as opposed to replacing or recombining DNA — if the edited fish went to market without any report to the government, how could it be distinguished from organisms created through gene manipulation? Inspectors can identify organisms created through gene replacement by the DNA added to the plant’s or animal’s genome. However, in organisms with a disabled gene, it is impossible to tell if this was the result of deliberate editing or natural environmental factors.

Some critics have also pointed to the risk of harmful genetic edits, such as creating allergens by deleting a gene by mistake.
END_OF_DOCUMENT_TOKEN_TO_BE_REPLACED