Please click here CUJ-JR-167 for the latest issue of Consumer Union of Japan’s English newsletter, Japan Resources (PDF). This time we focus on healthy, organic food and farming, while taking a stand against PM Abe and his ruling coalition, that has rammed through controversial legislation, bill after bill, threatening our civil rights.

From the Editors: Stop the Abe Train!

Street Events with the “Moms’ Project to Change our Food in Japan!”

The project to explore ways to help farmers in Bhutan switch to organic farming methods is progressing. This is an update by Mitsukuni Inaba (Director of Civil Institute of Organic Rice Cultivation) and Koa Tasaka (Co-chair of CUJ and board member of Asian Rural Institute) from their visit on May 28 – June 4, 2017.

Rice farming in paddy fields means weeds may be growing in the water before the rice is transplanted into the soil. Removing the weeds by hand tools, such as a rake, or machines rather than by using chemical herbicides is a requirement for organic rice farming. In Bhutan the prevalent weed is called Shouchum (Pondweed, Lat. Potamogeon). Flooding the paddy fields repeatedly will assist in removing the weeds, as they float to the surface after careful raking. On May 29 and May 30, Mr Inaba led the effort to flood two experimental fields for a third time together with Bhutan farmers and Japanese volunteers, and remove the weeds. Transplanting the seedlings was possible at the first farm, and organic fertilizer was applied to promote the growth of the rice plants as well as to suppress the weeds. 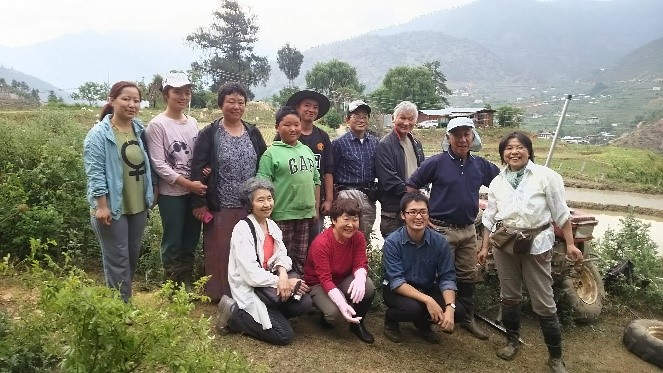 On June 1, the group visited the Bajo Seed Center. At their paddy fields, a lot of Shouchum grows and is usually removed with Butachlor, a synthetic herbicide that is known to be toxic. “At first, I was overwhelmed by the strong power of the native weed, Shouchum, which had grown so rapidly, and thought it would be very difficult to remove it,” notes Mr Inaba. “However, after watching them for a while I came up with a new idea: To plow them into the soil! Then, under the anaerobic condition, the weeds will be fermented and produce large amounts of butyric acid which will damage the bulb of Shouchum and the roots of other weeds as well. In this way, all the weeds would be suppressed effectively.”

Transplantation was done the following day. “We were amazed at the excellent operation by a Bhutan operator,” says Mr Inaba. “The operation of the transplanting machine is difficult, but he managed with great success.” Three types of rice were transplanted: A Japanese variety called Sasanishiki, and a local rice variety grown either in a regular nursery bed or in a pot-type nursery bed. Concludes Mr Inaba: “Many people participated in this activity of transplantation, and we feel enormous gratitude to those who joined us! At the next visit, we will check on the success or failure of the three types of young rice plants, the growth at an early stage, and the tilling situation, and look for the condition and possibility of a stable good yield.”

The next visit will be in the beginning of July, 2017, with a focus on weed control and preparation for soy bean planting. The project is supported by Japan International Cooperation Agency (JICA). Read more here (E).