Consumers Union of Japan was founded in 1969 as an independent organization working for a sound and healthy future. Our activities are guided by the principle that ordinary people have the right to live in peace and safety. This is the reason we are taking a stand against the proposed “anti-conspiracy bill” which was approved in a rushed manner on May 23, 2017 by the House of Representatives plenary session, and sent to the House of Councilors.

We oppose this proposed bill that has become increasingly contentious the more it has been deliberated. It is ambiguous and far-reaching, deeply influencing people’s lives and activities, with only suspicion needed to instigate wire-tapping, internet surveillance and other invasive methods that the law enforcement authorities can use.

For example, CUJ is working on a number of campaigns for the benefit of consumers to protect the environment and human health. This includes lobbying for strict regulations and putting pressure on government and corporations that make harmful detergents or promote genetically modified crops and GM food, which we strongly oppose. Other campaigns target agricultural chemicals and pesticide use, especially neo-nicotinoids which hurt both humans and animals. Many such activities and campaigns can now become regarded as illegal if they are interpreted to interfere with laws covered by the proposed conspiracy bill, including patent laws and other laws that protect corporations and their intellectual property rights.

Another law that is covered is the Plant Variety Protection and Seed Act. The purpose of this law is to protect the commercial interests of anyone who produces, registers and sells seed. Now, if you were to buy registered seed at a gardening store, grow plants from the seed, and then share the plant’s seed with others, this could be regarded as a conspiracy crime – a nightmare! By introducing the conspiracy bill, our normal world may be changed in an instant. Will this nightmare really come true? We do not want to make such a world become reality and we will have no part in living in such a world.

Sticker questionnaire in Futakotamagawa, Tokyo on Mothers’ Day, May 15, 2017

A new citizens group has recently been formed in Japan by people who oppose genetically modified food plus moms who participated in the March, 2017 events with Zen Honeycutt of Moms Across America. The group is called “Moms’ Project to Change our Food in Japan!” We are Japanese mothers who want to give safe food to their children, wishing to reduce the amount of pesticides and artificial additives in their food, as well as avoid GMOs. During the first event in the Tokyo suburb of Futakotamagawa we used a visual questionnaire to let people place stickers based on their opinions and knowledge about GMO food. 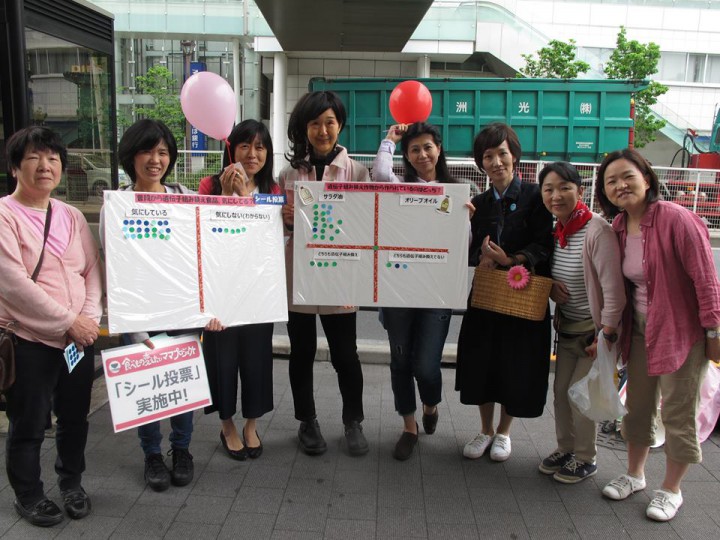 We held the event outside the busy Futakotamagawa train station where many families with baby strollers are passing by. All of us had decided to wear something pink and we also brought pink balloons. For about one hour, 27 people participated by placing stickers on our board with questions. 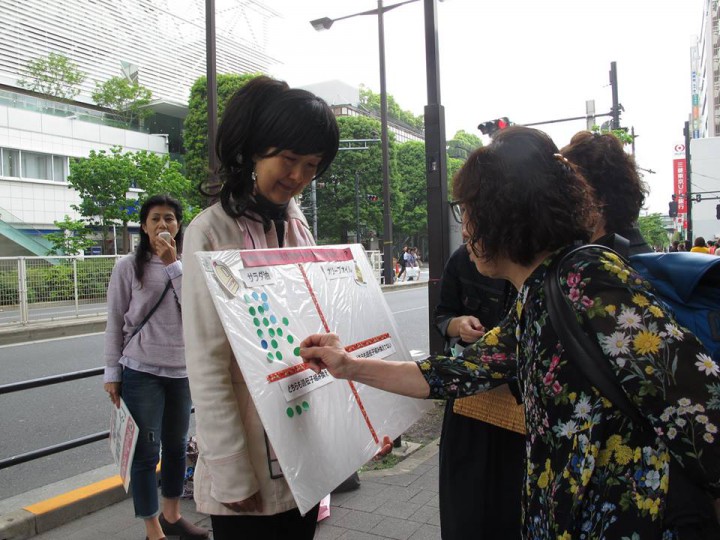 Here are some of the results:

21 people indicated that they worry about genetically modified food and 6 people indicated that they are not worrying or do not understand the issue. We also gave participants an opportunity to indicate which foods they think may be GMOs. 19 people correctly indicated that salad oil may be GMO and nobody indicated olive oil (there is indeed no GMO olive oil on the market). Only one person indicated that they did not know the answer. We thought it was encouraging that so many people share our concerns and also that so many knew the right answers regarding GMOs and are aware of the issue. It was also a good opportunity to explain that many GMO foods are not labelled, and that we want to change the labelling legislation so that people who wish to do so can avoid GMOs. “It’s a problem that we can’t choose” as one participant expressed it.

This was a brief event and we want to thank everyone who participated in making it a success. We will continue to hold similar events all over Japan in the near future.

May 22 is designated by the United Nations as the International Day for Biological Diversity. Genetically modified organisms (GMO) are known to have negative effects on biodiversity and there are international rules for handling GM crops to try to deal with the risks. There are indeed many examples of how GM crops threaten the environment and human health in the countries were GM crops are grown. This year, on May 28 we will screen two documentary movies that highlight such problems in the United States, Argentina and Romania. The movies are in English and Romanian (with English subtitles) but the seminar with our experts will be in Japanese. END_OF_DOCUMENT_TOKEN_TO_BE_REPLACED

It is only school lunch, but it still matters. In a year, a student (elementary or junior high school) will eat more than 180 meals at school. Supposing that rice is served 4 times a week, the student is at least served 150 bowls of rice yearly. As children are more susceptible to toxic substances, locally grown organic rice for public school lunch is a big step to protect children from being exposed to chemicals. Besides, the city says, the program is highly regarded by the parents.

Isumi farmers are encouraged to grow organic rice, which is supporting biological diversity, while affecting all age groups in the community positively. The school year starts in April. At the end of March 2018, we hope that they will carry out the pledge and celebrate their new policy of serving locally grown rice for school lunch.