Consumers Union of Japan and the No! GMO Campaign are working together to support Japanese farmers who want to grow more soybeans for domestic consumption. On February 23, 2016, the 18th annual meeting of the Soybean Trust Movement was held in Jiyugaoka, Tokyo as a way for consumers and farmers to meet and discuss the many issues involved. 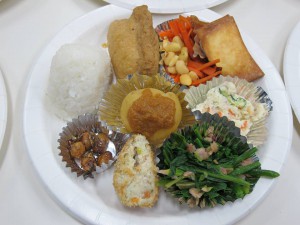 In 1996, the first genetically modified soybeans were imported to Japan from North America. This led to the formation of the Soybean Trust Movement as a way to counter the threat to Japanese traditional foods like tofu, miso and soy sauce that are made from soybeans. The aim is to increase Japan’s food self-sufficiency rate for this important source of protein and nutrients.

Ms. Setsuko Yasuda from the 21st Century Food Policy Vision spoke about the Trans Pacific Partnership agreement and new risks to food, while Keisuke Amagasa from the No! GMO Campaign made a presentation about the current status of GM foods and agriculture. Osamu Tsuchida from Tokyo Shinbun discussed the “land grab” problems associated with the plans that Japan’s government has to promote soybean farming in Mozambique.

Currently, the United States has just approved GM salmon, and there are new issues involving Du Pont’s controversial techniques to edit the genome. This could make it possible to bypass the legislation for older ways to genetically modify living organisms and GM food. On the other hand, there is an increasingly strong movement in the US to make labelling of GM foods mandatory. Here in Asia, we have recently learnt that Taiwan decided to ban GM foods in school lunches while also introducing stricter GM labelling rules.

A delightful lunch was served with organic soybeans from the Shumei Natural Farm Network (E). Clearly, growing soybeans is no easy task, and more efforts are needed to make more consumers aware of this important movement in Japan.

Last year, at the beginning of 2015, I wrote the following: “In order to avoid war and aggression, we should work towards peace and make sure we have a government that keeps peaceful relations with Japan’s neighbours in East Asia, and not engage in exporting weapons. I would like to maintain Japan’s Peace Constitution as a true deterrent, and not rely on military alliances which lead to the endless escalation of armament in our region of the world.” Unfortunately, during the past year we have seen the government move in exactly the opposite direction. In particular, on October 1, 2015 the Acquisition, Technology & Logistics Agency (ATLA) under Japan’s Department of Defense was established. Using tax payers’ money, armaments are being imported from other countries, while Japan prepares to start exporting domestically produced weapons and weapons systems. In my opinion, engaging in trade with weapons that kill indiscriminately is a shameful act. Aiming to make profits in such a way, the Abe administration made this a national policy. Instead, it is my sincere wish that during this new year, we should work towards demilitarization and finding peaceful solutions for the conflicts that are causing so much suffering. I strongly believe that most people agree that this is a better way forward towards world peace.

(Koa Tasaka is co-chair of CUJ)