Consumers Union of Japan again participated in a large demonstration against the changes in Japan’s constitution. The event was held on November 19, 2015 outside the Parliament in Tokyo, and some 9000 people participated. We were joined by our new group, Consumers and Citizens for Article 9, and the photo shows our two flags at the evening protest as we wish to collect 20 million signatures until April, 2016 to abolish the changes made to the popular “Peace Clause” of the post-war constitution. 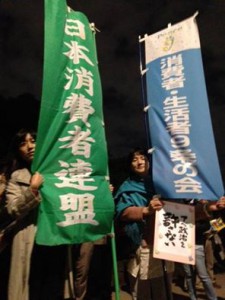 The famous fish market in Tsukiji, Tokyo will move to a new location. Doubts remain about the safety of the Toyosu site, which formerly hosted a large coal plant for making city gas. 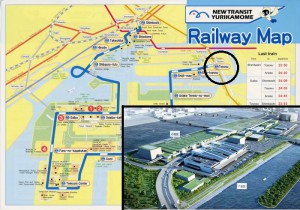 Naturally, existing operators in the market have expressed concern over the move. Makoto Nakazawa, secretary-general of the Tokyo Central Market labor union, is one of them. Nakazawa has worked inside Tsukiji fish market for about 30 years as a turret truck driver for an intermediate wholesaler. He claims there are a number of unresolved problems regarding Toyosu and believes the government should abandon its plan. (…)

Nakazawa has been organizing demonstrations with such organizations as the Consumers Union of Japan, opposing the relocation and calling on the municipal government to focus on renovating Tsukiji fish market instead.

As time ticks away, however, Nakazawa admits that most of the people openly opposing the relocation aren’t directly involved in the running of the market.

In February this year, Nakazawa surveyed 650 intermediate wholesalers regarding their views on the relocation. Out of the 254 respondents, 70 percent, or 179 shops, said construction for the new facility should be suspended until the area is completely toxin-free.

A further 55 percent said that the Tokyo Municipal Government gave little or no explanation on the details of the relocation to Toyosu. Their main concerns centered on the running costs of the new facility — the details of which, including the monthly expenses, have not been disclosed — and the contamination of the area.

“In truth, most people don’t want to move,” Nakazawa says. “I can, however, understand why many have given up. They may be experts on fish but fighting against the government is tough.”