We have had a busy fall going into winter, and still some snow this morning here in Nishi-Waseda, Tokyo. Lots of political changes too, while we continue our focus on energy issues and food safety.

Feel free to download the pdf file of Japan Resources No 157 and print it for your library.

Contents:
Do Not Approve GM Salmon!
BSE In Brazil
After the Fukushima Nuclear Disaster: The Roles of Consumers and Farmers
Proposal for a Basic Law to Abandon Nuclear Power!
Highlights from the Negotiations in Hyderabad about Biological Diversity
Stop TPP Action/Occupy Monsanto
Protect Biodiversity from GMOs: Hyderabad MOP6 Meeting

Consumers Union of Japan opposes GM salmon, and sent the following appeal to US FDA as part of their Public Comment (deadline Feb. 25, 2013): 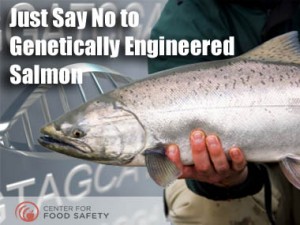 We the consumers in Japan are strongly opposed to the approval of genetically modified (GM) salmon. This GM fish has been said to pose no risks to the environment or as food, according to the December 12, 2012 evaluation by FDA. However, we regard it to be very unsafe. We ask that you do not approve it, for the following reasons.

If this GM salmon escape to the environment in large quantities, it will cause genetic contamination. Although the company that developed this GM salmon claims that it can be bred safely, it cannot be said that the technology to produce infertile eggs is 100% certain, and the possibility that the reproductive ability recovers is high. Consequently, there is a high probability that diffusion of the GM trait will occur.
It is our understanding that this GM fish will not be sold as such, but rather the eggs. It will then almost certainly spread to other countries around the world. Should this happen, the risk of contamination will be further amplified, as recovery is difficult once the fish have been released into the environment.

Japan imports large amount of fish. If this GM salmon is approved and starts to appear in markets around the world, it will create confusion among Japanese consumers. We do not want to eat transgenic fish, and we sincerely ask that you do not approve this GM salmon.

Note: Please sign the petition over at Center for Food Safety, asking US FDA to not approve GM salmon!

Open letter: Our demands regarding mad cow disease in Brazil

Japan’s Ministry of Agriculture, Forestry and Fisheries (MAFF) announced on December 8, 2012 on its homepage that beef from Brazil was infected with bovine spongiform encephalopathy (BSE) and that import of beef products from Brazil were banned from that same day. The following are problems regarding the slow response which we would like MAFF’s Risk Management Agency to reply to before January 21, 2013.

3) Please respond to the public regarding your ideas about taking responsibility for the risks associated with BSE and vCJD.

4) The import ban for beef products from Brazil will be kept in place until March, 2013 but until the results are presented and the consultation of the Food Safety Commission has reduced the risk, the import ban should be maintained. We also note that OIE still puts Brazil in the category of “negligible risk countries” and wonder why OIE is reluctant to change Brazil’s status. In addition, we strongly urge Japan to require all imported beef products to be fully investigated as soon as possible.