Action for an election to get rid of nuclear power reactors: How you can participate

It is time for another general election in Japan. Let’s turn this into an “Abandon Nuclear Power Election” and spread the message about the election candidates and their views about nuclear power. You can participate by asking the candidate on your town to approve a Proposal for a Basic Law to Abandon Nuclear Power and help us release their reply. 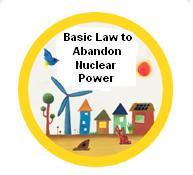 In August, 2012, Nobel literature laureate Oe Kenzaburo and others launched a nationwide network seeking the abolition of nuclear plants in Japan. Consumers Union of Japan also joined this network together with many civil society organizations (NGOs). As a result, some 103 members of Japan’s parliament have so far supported and approved the Proposal for a Basic Law to Abandon Nuclear Power. This bill is now waiting for deliberation during the next session of the House of Representatives.

It is regrettable that even though 80% of the population in Japan supports reducing nuclear power to “zero,” the views of legislators have not reflected this percentage number. Thus, we need to act now to get many more candidates to support the Proposal for a Basic Law to Abandon Nuclear Power. We can achieve this by monitoring which of the candidates have clear views about this important issue, and who will work for this goal. It is worth noting that all political parties have expressed some opinion or other regarding the “reduction” of nuclear power plants. The nuances in their views vary among the different political parties, and we need to carry out the campaign to get the individual candidates’ views. Asking the candidates to sign a “policy contract” before the election on December 16, 2012 will ensure that the Proposal will be enacted as we elect candidates who agree with the Proposal.

For more information and the list of names of the candidates who support or oppose the policy contract will be added to the Datsu Genpatsu Hou Seitei Network website (J) and the Soshi Net website (J):