22 May is the International Day for Biological Diversity and 5 June is World Environment Day. “These are particularly relevant dates as our rice heritage and biodiversity has been severely eroded since the Green Revolution in the 1960s and the advent of genetically engineered crops in the last two decades. Many communities depend on biodiversity for their sustenance and livelihood. It is time we reclaimed our right to a safe and biodiverse environment, especially at this time when communities need biodiversity the most to cope with the impacts of climate change,” says Sarojeni V. Rengam, Executive Director of Pesticide Action Network Asia and the Pacific (PAN AP). The Save Our Rice Campaign of PAN AP has been coordinating the CORA campaign since 2007.

CORA was launched as the Week of Rice Action in 2007. Since then, the impacts of the campaign have reverberated throughout the region, mobilizing millions of people to participate in rallies, workshops, festivals and other advocacy activities. CORA 2012 follows in the successful legacy of WORA 2007, WORA 2008, YORA (Year of Rice Action) 2009-2010 and CORA 2011. This is the first time IRAN is joining the CORA campaign. CORA 2012 which will also be a run-up the CBD (Convention for Biological Diversity) Conference of the Parties and Meeting of the Parties in October this year.

“We once had thousands of local rice and other crops varieties in India. People ate a good variety of healthy food. But ever since chemical pesticides and hybrid seeds came, we have lost our local seeds and crops, have less variety and a large population is suffering from malnutrition, especially women and children. We are no longer as healthy as we were before. I call upon my brothers and sisters across Asia to save their local seeds and food because it is only the diversity of these rich crops and seeds plus edibles gathered from the wild and our ecological farming practices which will ultimately save us from hunger, malnutrition and extinction,” says Sudesha Behn, a 72-year old woman rice farmer and activist from the Tehri Garhwal District, Uttarakhand, India who is also one of the founders of Beej Bachao Andolan (BBA – the Save Seeds Movement). BBA is one of the CORA anchor organisations in India. 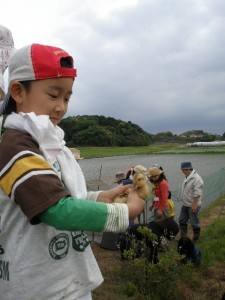 Here in Japan, the No! GMO Campaign is participating as the CORA anchor organisation. “We held an event in Osaka on May 22, 2012 on the International Day for Biological Diversity to let people know about the importance of biodiversity,” says Koketsu Michiyo, Consumers Union of Japan. “We had a number of speakers, including Robert Kenner, director of the documentary film Food, Inc. We feel it is crucial that consumers and farmers get a better understanding of the fact that genetically modified organisms (GMO) are a huge threat that jeopardizes biodiversity, not only here in Japan but everywhere the GMO crops are grown. Since Japan imports a lot of food, we need to raise the awareness regarding the GMO problem.”

On June 1, 2012 a symposium will be held in Tokyo about GMO and TPP (Trans Pacific Partnership). The aim is to expose the issues related to food safety that will be threatened if Japan joins the TPP agreement. “We wish to expand the network of anti-TPP and stop the TPP,” says Koketsu Michiyo.

Rice farming in Japan is especially vulnerable if tariffs are eliminated and cheap rice is imported. That also causes a number of problems for other farmers and ultimately exposes consumers to risks. Rice is also a part of our culture with many festivals and events all over the country. We cannot imagine Japan without rice! CORA 2012 is a good opportunity to think not only about the rice we eat every day but more deeply about our responsibilities to maintain biodiversity in Japan and Asia.

The Save Our Rice Campaign is dedicated to saving traditional local rice, small rice farmers, rice lands and the rice heritage of Asia through defending and advancing the cultural and food sovereignty of the grassroots and opposing the powerful threats to rice.

Please go to www.panap.net or www.ricewisdom.org for the contact details of CORA partners in the different countries.

(Image from a project to farm rice in paddy fields together with ducks, as part of the movement to educate people about biodiversity in Kamogawa, Chiba, Japan) 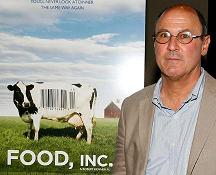 CUJ is glad to be able to invite US documentary director Robert Kenner to Japan. His film Food Inc. is a great exposure of the way the food industry and especially Monsanto have hijacked farming and food processing, creating a situation where it is almost impossible for consumers to know what we are eating. While the focus is on the US agribusiness, it also applies to practices in many other countries, and the frequent abuse against farmers, food factory workers, animals and the biodiversity on our planet.

Robert Kenner is an Emmy-Award winning film maker. He will participate at three screening events and give talks while in Japan. Everyone is welcome!

Organized by Japan Citizens’ Network for Sustainable Food and Agriculture