Comparing food labels used in Japan and in other countries reveals that many ingredients are not properly listed by Japanese food companies. Here, we take a look at flavour enhancers and food oils.

Processed foods often contain a type of chemicals known as “flavour enhancers” that are not explained on Japanese food labels. In Europe, they are listed as E621 (Monosodium glutamate) and so on. We looked at South Korean food labels and found that they list each chemical separately, just like in Europe, while they are all listed under one simple term in Japan. This term just means “amino acid etc” or “amino acid group” and also another term is used that means “yeast extract” which is very confusing for consumers. 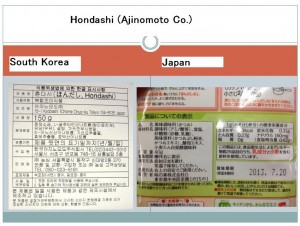 In a type of sauce called Hondashi made by Ajinomoto Co., which is flavoured by katsuo (Shipjack tuna) according to the Japanese label, the South Korean label has much more detailed information. In Korean, it lists the following additives and flavour enhancers (European food additive number in brackets):

A sesame dressing made by Mizkan Co. is also better labelled in South Korea, where the list of ingredients includes both E621 and E635, as well as several other food additives, like Tamarind gum and Xanthan gum, that are not listed on the Japanese label. Also, the Korean label clearly indicates that the amount of sesame in the dressing is 9%, with “natural sesame flavour” only 0.1% of the total!

A yakitori sauce made by Moranbong Co. was labelled very differently in South Korean compared to Japan. For example, the Korean label tells consumers that the product contains MSG (E 621) and other additives.

Even chocolate products are labelled in different ways: Lotte Co. makes a type of almond chocolate in its Urawa factory in Chiba, that is sold both in Japan and in South Korea. But in South Korea, the label clearly tells consumers that 25% of the product is almonds. The Korean label also lists each food oil that is used (Palm oil, Canola oil, Sunflower oil) while the Japanese label only lists “vegetable oil” without any details. As most people know, cheap chocolate contains a lot of lecithin. In Korean, Soy lecithin (E322) is clearly listed. In addition, the Korean label reveals that Shellack (E904), a glazing agent, is used, probably to coat the almonds, as well as Vanilla flavouring, which is not specified on the Japanese list of ingredients.

As these examples show, food labels in Japan are not as consumer friendly as in other countries, and identical products from the same food company are much better labelled abroad.

(Image courtesy of Seikatsu Club that provided the data)