Thank you for visiting the English web site of Consumers Union of Japan. We have recently renewed our Japanese web site to better reflect all our campaigns both domestically and internationally.

Spring is just around the corner, but there is still a cold wind here in Nishi-Waseda. We remember the victims of the disaster on March 11, 2011 – already one year ago – who still live under very difficult circumstances, with much concern about the future for the Tohoku region.

Feel free to download the pdf file of Japan Resources No 155 and print it for your library.

Contents:
No Consumption Tax Raise Without Real Reform
Food Additives: You Think You Know But Really You Don’t
Safety Standards or Double Standard?
Lecture Series: Consumers’ Perspective on the TPP Problem
Consumers Protest Against the Radiation Limits for Food
11,500 Participants In Yokohama Want Japan To Change Its Thinking About Nuclear Power

The Cabinet decided on February 17, 2012 that the consumption tax will be raised according to the principles that the government and opposition parties drafted in January. The aim is to reform the nation’s finances for the social security system. CUJ submitted the following letter to Prime Minister Noda on February 16, demanding a number of improvements to the proposal.

Please reexamine the increase of the consumption tax rate

CUJ strongly requests that the government’s policy of “first raising the consumption tax” should be fundamentally reexamined.

According to the proposed reform bill, the consumption tax will gradually be raised to 8% From April 4, 2014 and to 10% from October 1, 2015. The aim is to ensure a stable source of income for the social security system and at the same time achieve healthier public finances.

The plan is to obtain people’s understanding by regarding the raise of the consumption tax as a tax that is earmarked for social security. The four main areas of expenditures are the costs for the pension system, health care & medical treatment, social security, and the decrease in the birthrate. Although this may be carried out, we suspect that the true aim of the raising of the consumption tax rate is to use the funds as a stopgap measure to deal with the huge budget deficit. END_OF_DOCUMENT_TOKEN_TO_BE_REPLACED

CUJ and other groups held a joint seminar about food additives at Shufuren in Tokyo on February 28, 2012. Invited speaker Nakamura Mikio made a detailed presentation about the problems, with a focus on recent developments. 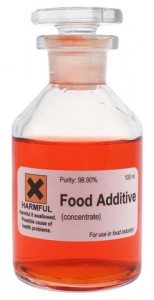 Japan has recently been forced to permit some 70 new food additives that are used in the US and Europe, or face the usual trade related wrath of food exporting countries. That means 423 food additives are now allowed in Japan as of December 27, 2011. Some 350 food additives have been used for a long time, with very few ones approved since the late 1960s.

The largest share is artificial flavouring and synthetic seasoning products, that amount to over 2.5 million tons. This includes the controversial class of additives that are loosely labelled as アミノ酸 など (amino acids etc.) in Japan. 107,000 tons of synthetic preservatives are used while colouring products add up to about 23,000 tons.

Azo colours, for example, were approved in December 1970, and were among the first products that Consumers Union of Japan campaigned against back in the 1970s!

What most people don’t realize is that over the past five years, a number of genetically modified food additives are permitted. They often fall under the “amino acids etc.” labelling requirement, thus consumers cannot easily avoid them. These include Amylase, Chymosin, and Riboflavin (Vitamin B2). Aspartame, the controversial artificial sweetener, is also made with biotechnology, and L-phenylanaline, L-glutamine, and other additives as well, with no labelling requirements. Here is information in English about food additives and GM microorganisms.

Nakamura Mikio noted that Japan no longer produces even one kilo of vitamins – all of it is imported. For example, China now produces 80-85% of the world supply of Vitamin C. He wondered if it really is OK that Japan does not have a single factory that can make such an important product.

The process to approve new food additives includes a way for consumers and the general public to send in comments. We encourage everyone to participate in this work. Consumers Union of Japan is also working for better food labelling to make sure that consumers can choose. We have a right to know what we are eating!