Consumers Union of Japan held a seminar about radioactivity and food safety at Meiji University in Tokyo on January 29, 2012.

Furitsu Katsumi, Hyogo College of Medicine, spoke about the lessons learnt from Chernobyl. Since the Chernobyl accident in 1986, in Belarus, as well as in the outskirts of the area, measures for food safety has been taken, and there is a lot of experience with the aim to protect consumers. What are the conclusions of these experiences? 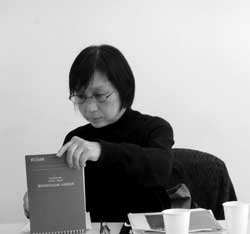 Dr. Furitsu called the current approach to safety standards a double standard and expressed her concern about the ICRP radiation protection standards. Learning from the consequences in Chernobyl, it is important for consumers in Japan to measure the radioactivity in foodstuffs. The situation is very worrying notably about consumers’ health, especially for young children, who are 3 times as sensitive compared to adults. For example, after the Chernobyl accident the rate of thyroid cancer increased considerably, especially among children.

After the Fukushima accident, the consequences on foodstuffs are numerous. There is a sense of crisis in the agricultural industry, for example regarding tea plants from Shizuoka, that are not possible to export. The importance of measuring the rate of radiocativity was emphasized during the conference. It was also noted that if we wash food stuffs twice, before eating them, the rate of radioactivity is reduced.

Consumers Union of Japan is denouncing the lack of openness concerning the rate of radioactivity in Fukushima prefecture and the surrounding areas, and also, the slowness of reaction from the government. Even almost one year after the Fukushima accident, most of the evacuated inhabitants cannot return to their homes, while farmers and consumer co-operatives have not yet received compensation from TEPCO.

Consumers Union of Japan and other organizations have jointly started a lecture series to discuss the problems with free trade agreements from the consumers’ perspective.

During the APEC meeting in the fall of 2011, the Noda Administration expressed that Japan will participate in the Trans Pacific Partnership (TPP) negotiations. Mass media made it appear as if only farm groups are opposed to trade liberalization, belittling the difficulties while emphasizing the potential economic benefits. It seems that there are many people who do not understand what kind of influence the TPP will have over citizens’ daily lives, also among ordinary consumers. Consequently, we started this lecture series with the theme “Food safety is being threatened.” END_OF_DOCUMENT_TOKEN_TO_BE_REPLACED

First of all, we protest against the provisional limit which was set by MHLW as high as 500 Bq per kg, and which have been applied for an extended period of time.

Furthermore, these values were intended as a “proposal” to reduce the maximum allowable dietary intake of radioactive Caesium from 5 millisievert to 1 millisievert. Below, we will point out what we regard as the problems with this “proposal.”

We are also concerned that it may take a long time before this interim measure will be reexamined.

We ask the government to consider these points seriously, and to create strict rules according to the suggestions below:

1 Ensure that the annual amount of contamination will be below 1 millisievert
Contamination by radioactive materials should be as low as possible. If we go by the recently proposed regulations by MHLW, the annual exposure of ordinary people will not be reduced to below 1 millisievert, which ICRP is advocating. Instead, the government should make every effort to reduce the internal exposure from food to as close to zero as possible.

Although it has been reported that it is difficult to convert measurements of Strontium and Plutonium into Caesium, these nuclides also have a large impact on human health. Original standards and levels are thus needed for these as well.

It is our view that the premise by the Food Safety Commission to deal with additional contamination that is due only to food has not been fulfilled under the present circumstances.

In order to protect children to the highest degree possible, there is a proposal to use 40 Bq/kg as a an independent limit for school lunches. We regard it as unacceptable that the new provisional limits from MHLW ignores this proposal.

2. Consider the food habits of people
After the Chernobyl accident in Ukraine, strict levels were introduced for staple foods like potatoes and vegetables that are eaten on a daily basis. The levels are 60 Bq/kg for potatoes and 40 Bq/kg for vegetables. Such consideration has not been shown by the Japanese government. We urge MHLW to take people’s eating habits into consideration.

3. Consideration for children is needed: Set strict limits especially to protect infants
Special consideration is needed for children, and the limits for infants should be set as strict as possible. In addition to radioactive Caesium, internal exposure also occurs due to radioactive Strontium, radioactive Iodine, Uranium and Plutonium, etc. There is also external exposure, but the provisional limits for food are set equally to people of all ages. Moreover, even in the case of the limit for food items intended for babies, the limit is too high. For food for babies, the limit is 200 Bq/kg which is not proportional to the weight of babies compared to adults, for whom the limit is 500 Bq/kg.

The US National Academy of Sciences has clearly stated that children and also embryos are 10 times as susceptible to radiation compared to adults, which Japan’s Nuclear Safety Commission has pointed out should be taken into consideration. We regret that MHLW has not sufficiently reflected this in the recent proposal.

4. Careful, public verification needed
Foods should be carefully tested for radioactive materials, and the results should be made public. Especially children, and coming generations yet to be born, need to be protected by the strictest possible regulations.

We demand that the testing should be carried out promptly according to the precautionary principle.

Read more about the new limits: 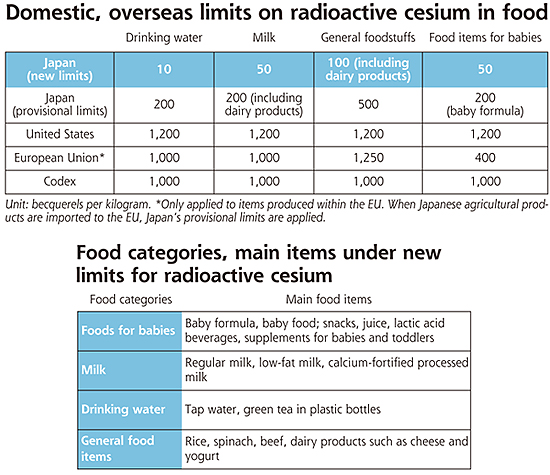