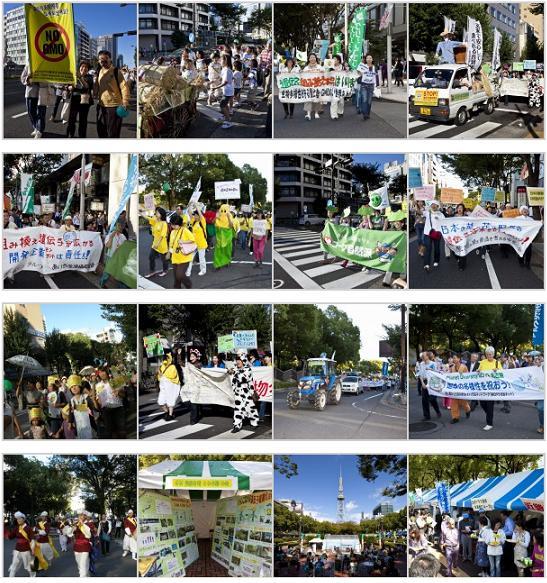 Here are some photos from the large Nagoya event on October 10, 2010 with over 1,000 participants who walked through the busy streets with banners and costumes, to protect biodiversity and protest against genetically modified organisms (GMOs)!

For large images, please go to the MOP5 Network website and click on each photo – feel free to copy and paste on your blog, and don’t miss the images here: END_OF_DOCUMENT_TOKEN_TO_BE_REPLACED

On October 15, 2010, the general meeting of the MOP5 adopted the Nagoya-Kuala Lumpur Supplemental Protocol to the Cartagena Protocol.

Our MOP5 network notes that this is the result of a long and difficult negotiation. We consider this legally binding protocol to be important as an international system of liability and restoration which the developing countries in particular has long anticipated. END_OF_DOCUMENT_TOKEN_TO_BE_REPLACED

Wild-growing genetically modified canola plants have been found at many locations around Japan on numerous occasions. The first investigations by concerned citizens started in 2004. The spilling occurs mainly near harbours and by roads leading from the harbours to food oil companies. Japan’s importing companies and food oil companies that make canola oil, as well as the transport companies involved, are all directly responsible for the contamination of native canola (including rape seed, natane).

Japan has many small/medium size companies that make food oil from domestically grown rape seed. Also, many plants of related species are eaten traditionally in Japan. These food oil manufacturers, farmers and consumers – who want to eat healthy and safe food – are the victims if genetically modified canola continues to spread and grow in Japan.

We are concerned about this issue at the local level. The issue is getting serious, and we must call for an end to imports of genetically modified canola. Crops that can contaminate local plants should not be imported. Meanwhile, we need strict rules for liability and redress to deal with contamination issues that arise from trade with the genetically modified crops. Rules are needed and they should be legally binding with effective compliance at the local and national level.

We have met with representatives from both food oil companies and trucking companies. Requests have been made for improving the handling practices, including better designs for the trucks. We demand that spilling cases should be dealt with immediately, and that any genetically modified canola plants growing wild in Japan should be exterminated.