Change! The nationwide meeting on January 30, 2010 has passed the following resolution, for a change in the US-Japan relationship, and to not accept the Futenma base to be moved to Henoko.

In 1996, both the Japanese and the US governments agreed to close the Futenma base inside central Ginowan City in Okinawa, which occupies 1/4 of the city’s land area. It is a very dangerous location for an airport, in the proximity of schools and day care centers, as well as the 3600 citizens of Ginowan. We recall that five years ago, a US military helicopter crashed on the Okinawa International University campus next to the Futenma base. We demand that the Futenma base be returned to Japan unconditionally as a necessary measure to stop helicopters and airplanes in the area. 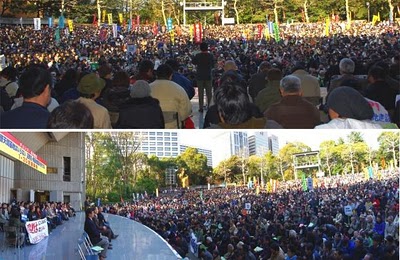 However, the Futenma base issue has still not been resolved. The reason is that the US wishes to construct a new base off the coast in Henoko, and claim that the return of Futenma is not possible until this base is ready. The previous Japanese government had agreed to this plan. The cost for constructing a new base at Henoko has been estimated to be 1 trillion yen, a fact that has largely been kept out of the discussion.

Okinawa is experiencing danger and the destruction of life, and is far from becoming wealthy. In addition, the construction of a new base at Henoko would mean the loss of a natural environment where the dugong lives in the pristine ocean environment.

We also note that the citizens of Nago have clearly rejected the Henoko plan and voted against the new base construction on January 24, 2010. To defend this public opinion, the citizens and workers in the entire country should join the battle.

The islands of Okinawa were a battlefield during World War 2, followed by US military occupation. The people are exposed to danger and damage in their daily lives as a result of the military bases.

The Japan-US security agreement has been in place for 50 years, but the cold war ended 20 years ago. The old security agreement that relies on military deterrent must be fundamentally reviewed. A thorough verification is also needed regarding the budget allocation for US military damage inflicted on Okinawans.

The review should thoroughly explore the Japan-US security relationship, and find ways to strengthen the peace in East Asia, as suggested in the Hatoyama government’s basic policy outline.

Prime Minister Hatoyama, you must ease the burden and pain that the citizens of Okinawa are experiencing, as you attempt to solve the problem of the US military bases in the prefecture. Instead of seeing this as an isolated issue, isn’t this the moment when you should take on the big challenge to close and dismantle the US military bases not only in Okinawa but also in the entire country?

Resolution adopted by the participants at the January 30, 2010 event in Tokyo, Japan, for a change in the US-Japan relationship, and to not accept the Futenma base to be moved to Henoko. 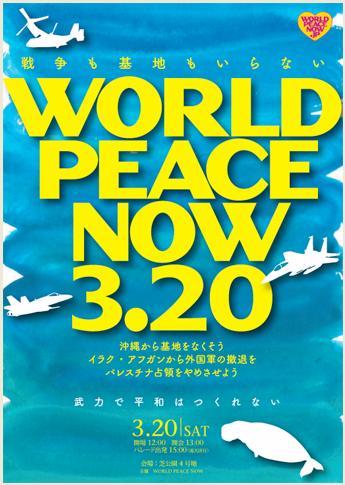 Peace groups are gathering at noon in Tokyo on Saturday for a big anti-war event on the 7th anniversary of the Iraq War. The booths with information as well as rally speeches start at 13:00.

Do join the parade, as they call the demonstration, starting at 15:00 from Shiba Koen #4.

Here are the organizations who arrange this World Peace Now event:

Biological Diversity & Organic Farming
2010 is the Year of Biological Diversity and here in Japan, we are preparing for the United Nations conference in Nagoya in October, 2010. In this special issue of our English newsletter you will find articles about experts and activists in Japan and from abroad with much to teach us about biodiversity and sustainable farming methods. We also publish a special two part interview about why “old” style vegetables taste better, the importance of healthy seeds, and the concerns associated with F1 hybrids and especially genetically modified organisms.

Feel free to download the pdf file and print it for your library.

Contents:
Biodiversity in Focus: Christine von Weizacker visits Japan
Organic Agriculture, Forestry and Fishery Project Based on Humus: Notes from a Lecture by Uozumi Michio
Interview with Noguchi Isao: The Future of the Seed of Life
Japan Citizens’ Network for Planet Diversity

12 years of campaigning for more domestic soybeans in Japan

Today, we have returned to Shinjo City in Yamagata Prefecture 12 years after the Soybean Trust Movement was launched here in this wonderful furusato (rural) environment. The Soybean Trust Movement responded to the appearance of genetically modified soybeans that were imported from the United States. The aim has been to raise awareness among both farmers and consumers regarding how we can jointly raise Japan’s low self-sufficiency rate. Over the past 12 years we have made every effort to make safe soybean foods available to all consumers, who could appreciate the homegrown soybeans without any worries or concerns. In addition, we recognize that the bond between farmers and consumers has been strengthened, showing the way to the future of food in this country.  END_OF_DOCUMENT_TOKEN_TO_BE_REPLACED