We are having warm days and chilly evenings right now in Tokyo, with a lot of activities and conferences, in addition to the busy political climate. Here is our English newsletter. We think you will find this issue particularly interesting, with articles about nuclear energy protests, the “failure” of cloning as well as food safety. Feel free to download the pdf file and print it for your library.

The Problem With Econa Oil
Protect Biodiversity At MOP 5 In Nagoya
Consumer Agency And Consumer Committee – Our Concerns
7000 People Saying No To Nuclear
Cloning: The Real problem In Japan
Researchers Recognize: “Cloning Has Failed”

Report From Our Visit to the National Livestock Breeding Center:

Food Safety Citizens Watch visited the National Livestock Breeding Center (NLBC) in Fukushima Prefecture on September 9, 2009. This is the center that has been designated to continue the work that started in 1998 to improve the productivity of cattle breeding using somatic cell clone technology. In June, Japan’s Food Safety Commission stated that “somatic cell cloned livestock is safe for use as human food,” i. e. that meat and milk from from cloned cows, pigs and so on will be safe. However, among consumers, a strong sense of doubt and insecurity remains, as researchers have not been able to eradicate problems such as stillbirths and abnormal deaths among the cloned animals. In order to investigate the current status of the research, we visited the NLBC.

First of all, we were surprised by the low success ratio of somatic cell clones, which is not even 3% among domestic animals. At the NLBC ranch in Tokachi, Hokkaido, researchers have so far attempted to create 1,509 cloned cattle, but only 391 were conceived properly, or around 26%. Among them, we were told that only 42 heads survived feeding and achieved normal growth, or 2.8%.

During our visit, the center frankly admitted, “We have currently not achieved any rapid improvement.”

END_OF_DOCUMENT_TOKEN_TO_BE_REPLACED

Today CUJ celebrates World Foodless Day 2009 at an event at the Tokyo Women’s Plaza in Shibuya, Tokyo with many NGOs, including PAN Japan, Tanemaki, Coop Shizenha in Tokushima, and other groups that focus on natural agriculture and rice farming, protecting rice paddies, as we together work for ensuring that consumers have access to safe food. The theme of this year’s event is Rice: Let’s Enjoy Farming, Let’s Enjoy Eating!

No! GMO Campaign has more details (in Japanese)

In September, Kao Corp. announced [1] that it would “temporarily” stop sales of its best-selling Econa food oil products, called Enova in North America [2]. The news was a shock to everyone in Japan as the products carried the designated health food label, indicating that the oil was a food for specified health uses (such as cholesterol reduction). This is an example of the confusion that can occur because Japan does not apply the precautionary principle in its food legislation. END_OF_DOCUMENT_TOKEN_TO_BE_REPLACED 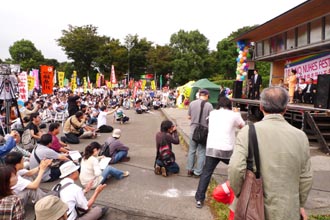