On May 20, 2007, the World Organization for Animal Health (OIE) classified the United States as a “Controlled Risk” country, together with Canada, Switzerland, Taiwan, Chile and Brazil. This rating was decided at the OIE general meeting based on each country’s BSE status. As a result of this OIE rating, exports of US beef will become unrestricted after Specified Risk Material (SRM) is removed, even for beef from older US cattle.

We are concerned that this will lead to a US demand for the easing of the beef export agreement with Japan’s government.

Consumers Union of Japan is opposed to the latest result from the OIE scientific commission. The reason is that the US countermeasures for BSE remain insufficient.

Australia-Japan Free Trade Agreement- A bad deal should be stopped

We, the undersigned people and organisations, believe that the Australia Japan Free Trade Agreement (FTA) will not bring real benefits to the people of Australia and Japan.

Given that Australia and Japan already have a strong trading relationship; the predicted economic benefits are unlikely; and that social and environmental costs have not been considered, we believe that the negotiations of this FTA should not take place. Instead, we believe there is a need to rethink multi lateral trade rules and develop a global trading system based on real development, fairness, democracy, and sustainability.

Read the full text of the joint statement (PDF file):

Australia-Japan FTA: A bad deal should be stopped

Signed in May 2007 by Consumers Union of Japan and 23 Japanese organisations, as well as 90 Australian organisations and networks.

Consumers Korea organized the international conference about environmental hormones or EDCs in Seoul, South Korea on 22 November, 2006. The conference was supported by KFDA National Institute of Toxicological Research and some 100 people participated.

Martin J. Frid was invited to represent Consumers Union of Japan, together with Dr. Michael Hansen from Consumers Union (US) and Sarojeni Rengam from Pesticide Action Network.

Read the entire article in Japan Resources No. 139 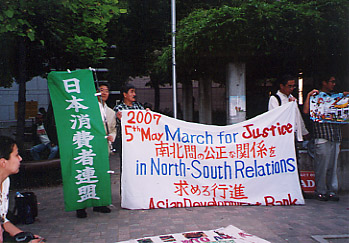 Mr. Yasuaki Yamaura from CUJ will make a speech about demands of Japanese farmers and consumers at the Asian Development Bank NGO Forum in Kyoto, Japan on May 6, 2007.

NGO Forum on ADB (FORUM) is an Asian-led network of non-government and community-based organizations that support each other to amplify their positions on Asian Development Bank’s policies, programs, and projects affecting life forms, resources, constituents – the local communities.

From a loose network since 1992, network partners agreed in 1999 to evolve the network into an independent organization. Since then, the NGO Working Group became known as the NGO Forum on ADB. Forum was legally incorporated in the Philippines in May 2001. 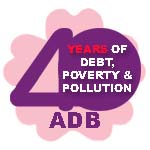 Over the past decade and a half, the campaign has brought some modest yet significant gains. The ADB campaign has contributed to changes in the Bank’s policy in terms of:

Since the NGO Working Group was created, practical lessons have been gained from the campaign experience. Whether the ADB can match its newly-enlightened policy rhetoric, however, will depend largely on the continued vigilance, monitoring and action by NGOs, public interest groups and social movements.