On March 15, 2019 a campaign to demonstrate against the lack of action to stop climate change will hold events around the world. Here in Japan, events are planned at Yoyogi Park, Tokyo (15:00) and at the City Hall in Kyoto (12:00-1300).  Again, on March 22 a demonstration will be held outside the Japanese Parliament Building in Tokyo (start 15:00). Bring your own plackard! 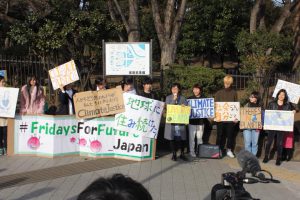 (Photo from the February 22, 2019 demonstration in Tokyo)

I took part in the 9th GMO-Free Europe Conference which was held on 6th and 7th of September 2018 as one of three delegates from GMO No! Campaign, which has been campaigning against GMOs with the Consumers Union of Japan.  More than 200 participants not only from Europe, but also from Africa, Asia, North America gathered in Berlin to discuss GM issues.

Until I visited Berlin, I did not know much about the situation surrounding GM issues in Europe. What I was told before my departure was that in the EU, food made of GM ingredients were hardly available because of mandatory labelling requirement for GM foods; also, European people are averse to such foods, therefore food companies do not sell products made of GM ingredients.  I, being a skeptic, could not believe it, because Japanese situation is completely opposite, and it is so difficult to buy food without GM ingredients unless you do your shopping online or go to natural food shops.  When I realized that what I was told was true, I was shocked!  In order to avoid GM food in Japan, you need to know labelling rules and their loopholes, but most Japanese are kept ignorant of these.  Therefore, most of us end up eating large amount of GM food without being aware of that, or even worse believing that they don’t eat such food, as the rules are far from clear.

In one part of the world, GM-free foods are readily available, so people there eat those foods effortlessly, whereas in other part, conscious efforts are required in order to buy such foods, otherwise people eat food of which health impact is not fully understood.  Isn’t this terrible?  If there is no change of policy, Japanese kids might be more prone to be ill due to GM foods and other nasty stuff.  Will the place of birth determine the health and fate of children?  I suspect that Japanese kids cannot enjoy the same level of health that children in the EU are entitled to.

A few weeks before the Berlin conference, the decision by the European Court of Justice came out, in which the ECJ ruled that gene editing techniques would be subject to the same regulations as GMOs, hence plants and animals obtained by genome editing would need to go through the requirements of risk assessment and authorization.  The decision was, according to many GMO activists who attended the conference, needless to say, very welcome, but also unexpected.

In contrast, Japan seems to be heading to a completely opposite direction.  An experts’ panel for the Ministry of Health, Labour and Welfare of Japan proposed that most of the foods developed using gene-editing can be marketed without safety assessment.  Furthermore, those foods could be placed on the market without appropriate labels.  The outcome could be devastating for the health of people living in Japan and the environment.

Taking part in the conference gave me good opportunities to compare Japan and outside world.  I would like Japan to prioritise protection of human health and environment, based on the precautionary principle like the EU does.  Regretfully, the priorities of Japan, or more notably the Abe administration, are the economic growth and the protection of interest of multinational companies, sacrificing the health of Japanese people and the quality of the environment in this county.  Empowering Japanese NGOs might provide a key to facilitate changes in Japanese society.  There must be so many lessons we can learn from European experiences.

By Ryoko Matsuno, a member of the GMO No! Campaign & CUJ board member

In 1962 for the first time, consumer rights were advocated by President Kennedy in the US. Here in Japan, we had just entered the era when slogans such as “consumption is a virtue” became popular. In 1980, the International Organization of Consumers Unions (IOCU, now known as Consumers International) developed the idea further by establishing eight fundamental consumer rights. They are:

8 Right to a Healthy Environment

Currently, we are in the final stages of the debate about improving the GMO labelling system in Japan. We regard information about which foods are genetically manipulated to be an important and fundamental consumer right.

However, Japan’s ruling party and the government do not seem to like this concept of “consumer rights.” In Umeda Masami’s book, The History of Japanese Nationalism, he explains how in 1982, the Education Ministry’s textbook for writing changed its recommendation from “Do not use this term” to “Write like this.” For example, “consumer rights” was no longer recommended, and instead, “consumer life” should be used. Other official recommendations were also made, including terms for writing about defense and the atomic bomb. Seen in this light, it becomes clear that the government dislikes the idea that consumers have rights, and we can understand why this concept is being systematically neglected.

In the old Greek mythology, Pluto was name of the god that ruled the underworld, where souls go after death. Someone who has recently been thinking about this is Nakajima Tetsuen, the head priest of the Buddhist temple Myoutsuu in Obama City, Fukui Prefecture. He currently serves as the chairperson of a local group of citizens that oppose nuclear power in the prefecture.

In December, 2016 the decision was finally taken to decommission and scrap the infamous nuclear reactor called Monju in Tsuruga City, Fukui Prefecture. To celebrate this, the citizens met on November 5, 2017 where Mr. Nakajima explained: “We should not walk the path to hell of Pluto, but instead follow the path of the Buddha, which is the path of the living.”

In Obama City, there are no nuclear power plants, but nearby, as many as 15 reactors are located around Wakasa Bay. The reason is the strong opposition by people in Obama City, led by Mr. Nakajima. In other locations that accepted nuclear plants, a splendid gymnasium or huge hot spring facilities were built using special government grants, while Shinto shrines and Buddhist temples and old roads greet visitors to Obama City.

The priest of a Shingon temple with traditions dating back from the 9th century uses Buddhist teaching to communicate his message: “Maybe we can believe that Monju (also known as Manjushri) is a compassionate bodhisattva who will wake us all from the nightmare of multiplying hellish rulers…”

October 16 is the World Food Day, as designated by the United Nations. The aim is to combat hunger and promote agriculture, while the forces that makes this difficult to achieve are having the opposite results. Regional conflicts and nationalism are increasing poverty. We are especially concerned about the concentration of economic resources into the hands of just a few corporations that control the global economy. At the same time, governments have embarked on EPAs and FTAs that ignores public opinion and lead to more division in society.

In just the past 12 months, the worst case scenario has become reality, with multinational agribusiness takeovers and mergers, much as we predicted over 20 years ago. This is a de facto monopoly over the global seed supply and cannot be accepted. How are we as consumers and farmers supposed to react to Bayer taking over Monsanto, while DuPont merged with Dow, and Syngenta was purchased by a ChemChina, the Chinese chemical company, except to oppose it? Our health and freedom to farm and purchase food that we can trust will now be completely at mercy of these few multinational corporations that control genetically modified crops through DNA patent rules and global agreements on intellectual property rights and other strong-arm tactics.

At the same time, this year we learned that genetically modified salmon has been approved in North America in spite of protests. This is the first GM animal to be sold as food. If this is acceptable, where does it lead us next? New GM technologies such as genome editing and RNA interference are also increasingly being promoted. Examples include canola and potatoes developed with these new GM techniques.

As if this is not enough, in April 2017 the Japanese government suddenly abolished the 1952 Seed Law, after multinational corporations engaged in the seed business complained that the publicly funded seed program hindered their attempts to expand their business. After only a few hours of deliberation at the Agriculture, Forestry and Fisheries Committees of the Parliament, the new Seed Law bill was passed without any concern for the possible impacts on our agriculture and food systems. Instead, we maintain that the trend to undermine Japan’s public seed program for major crops should be stopped. We should ensure that the national and local governments will remain involved in the seed program as an essential part of our food security policy.

We have clear evidence that agriculture as promoted by multinational corporations are destroying the health of citizens, in particular children. It has been admitted that agricultural chemicals are the main cause of allergies, which are becoming increasingly common, and evidence from the United States show that children’s development is impaired by such residue in food. The most serious problem is GM foods as their introduction 20 years ago has led to a drastic increase in the amount of toxic glyphosate used and consumed. However, the Japanese government keeps changing the allowed residue levels leading to higher levels of pesticides and herbicides, even relaxing the standard for glyphosate as recently as July, 2017. We need to radically change the current thinking about agriculture and get rid of dangerous chemicals from our food supply.

We believe in expansion of agriculture that is small-scale and organic, with local production for local consumption, within an international framework that connects citizens around the world. Co-operation is the basis for world peace. Furthermore, we believe that World Food Day should stand for agriculture without harmful chemicals, allowing no genetically modified or genome edited foods. We will continue to fight against multinational corporations and their systems that lead to hunger and malnutrition.